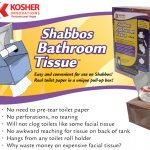 I’m sitting in the bathroom when I do the awkward behind reach to the stack of pre-cut shabbos toilet paper on the top of the toilet. I can’t seem to get any, I either get the whole stack or nothing, they appear to be stuck together and in my frustration I begin to ponder how it came to this, how did we get to the point of it being an inconvenience to wipe your self on shabbos? I wondered if the shrinking size of the Jewish Press had to do with peoples unwillingness to be get on top of the toilet after cholent and stay there to read the entire paper.

The history of shabbos toilet paper:

When I was a kid everyone used regular toilet paper, if you were a frummy, you used tissues. Then modern orthodoxy began to shift to the right and we caught up to the frummies, we started using tissues as well. Then the frummies said that tissues stuck together so many of them said that you could tear toilet paper as long as you didn’t do it on the seems.

Then the frummies decided that tearing toilet paper was just as assur as cutting letters on birthday cakes and they went to those really poor quality tissues with the mountains on the boxes that apparently didn’t stick together. The modern orthodox wanted to keep moving to the right so we went back to tissues, but we heard that tissues with lotion may not be kosher for shabbos so we didn’t use them.

Then someone in the frum community (probably the people behind kosher innovations which makes 100% kosher for shabbos toilet paper) decided that you had to use pre-cut toilet paper which allows frumies to profile those who use tissues or toilet paper when a guest in their bathroom.

Like all communities the frummy community has a problem, while they are fervently pro-pre-cut toilet paper (it gives the little kids another erev shabbos chore) they continue to use tissues in shul, I have never seen a shul that used pre-cut toilet paper on its tables.

Most modern orthodox people have gone back to traditional tissues, though I am sure there are plenty modern orthodox machmir types who want to appear more frum who go with the horrible idea of pre-cut toilet paper. I am just wondering when someone will invent pre-cut toilet paper for shabbos use? Heck, Hollister sells pre-ripped jeans for those who want to look like they wore their own holes in them.

24 comments for “A Brief History of Shabbos Toilet Paper”