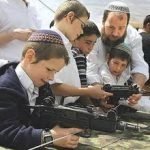 By Anonymous Guest poster from Israel

Due to the security situation in (and America too) many shuls need to have armed congregants in attendance as a first response to deal with any security threats.

I know this one guy in Israel.  He’s an IDF reservist and is on his community’s (somewhere in Gush Etzion) Counter Terrorism Team.  So like many in Israel, he carries a Pistol all of the time.  He also carries a Rifle and even brings it to Shul.

He carries a gun wherever he goes. Often 2.  He’s on his community’s Counter Terror Team and is tasked with being on call 24-7.  This means that if there is a terror indecent or a threat to his community, he and his team members go into action and put down the terrorist.  So they carry M16 and M4 rifles to Shul, the park, to friends houses, all over.

On Shabbat, when most of them are home, the guns really come out of the closets.  Off duty IDF servicemen and IDF Women are also encouraged to carry their guns.  He said that a friend from Canada who came for Shabbat once remarked that being in his Shul was like being an episode of 24.

He also pays attention to guns everywhere and when he travels for Shabbat he sees the different personalities and weapons they carry.  Some of his observations are hysterical.

Most of the people you see with guns in shul are not what you’d expect.  They are just regular Joes, older, balding, out of shape types who carry whatever gun they have just to keep their community safe.

One guy carries his rifle like Elmer Fudd and walks around scanning the area… You can almost hear him mumbling, “Where is dat wascally wabbit?”

Another guy, bald with a pot belly is often mistaken for Homer Simpson!

One guy with a Lady Smith (a tiny little pistol like a woman would keep in her purse, it looks like it’s name) carries it around in a decrepit holster hanging from his belt on the front of his pants, it looks like its either going to fall off or misfire into his crotch,  He even has an spare magazine dangling on his belt too, like he’s ever going to get into a firefight and need extra bullets each that make a hole smaller then a mosquito bite.

There’s this one guy with a big silver pistol in a cut down holster, like the kind that a Texas Ranger would carry on TV.  The only thing is he’s is about 5 feet tall and is built like a bowling ball.

Then there this one guy.  He’s into working out and is built like he could stop a whole terror cell barehanded.  And don’t shake his hand, he likes to leave a lasting impression, on your fingers!  He’s  apparently been playing around with barbells for so long that he doesn’t know the meaning of the word heavy.  He carries the full load of gear, an M4 rifle with every conceivable accessory, hundreds of rounds of ammunition, and a utility belt that would make  Batman envious.  He’s even got knives.  Why would anyone want to get close enough to a terrorist to use a knife?

72 comments for “Guns in Shul: Who’d have thought it could be this funny?”