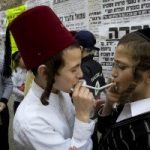 The walls in my yeshiva dorm were painted white, thus one of the favorite places to stash cigarettes was to tape them outside of the package to the wall. It was a strange practice, made even stranger when those same folks would take the cigarette off the wall, tuck it behind their ear and tell the dorm councilor they were going down the block to CVS, when in reality they would go past CVS, find a dumpster and go smoke behind it. Then you had the kids who kept their cigarettes in their freezers, shoes, cereal boxes and other regular stuff that was located around the room. In fact, cigarettes were kept in pretty much the same places that porn was kept and I always wondered if it was really worth the trouble.

To this day I have never smoked a cigarette, not one puff on purim, not one drunken puff in the bathroom as a 12 year old, nothing, I didn’t even smoke weed until I was 27, so I am not what you would call a smoker, but I always wondered about the Yeshiva smoking culture. I used to think that in order to truly be yeshivish you had to smoke, it was what those kids who wore white shirts and black pants did for fun, they smoked cigarettes, made barbecues between sedarim and went to casinos during out shabosim.

I could never stand the smell of cigarette smoke, it always nauseated me somewhat, it still does, but when you got called into the Rosh Yeshivas office you couldn’t make that excuse. He was what you may call a smokestack, constantly puffing on a cigarette while telling others not to smoke, I never understood how one could be a true role model by telling someone not to do what they were doing themselves. You may say that he knew it was a bad thing, but you see, he was telling the high school guys not to smoke, it was merely an age thing – not the age 18 thing by the way, considering the fact that some beis medrish guys were under 18 yet afforded the privileges of smoking.

People have been bugging the Rabbis to ban smoking for sometime, but that’s obviously a slippery slope. Could you imagine a rabbinical ban on transfat, alcohol, cholesterol and gas guzzlers? That means no one could slurp the gefilte fish jelly out of the jar, eat kishke, make Kiddush or shuttle their 13 children in one car, that would seriously inhibit the ability of the frum community to take care of itself.

I doubt the rabbis will ever seriously tackle the issue of smoking within the frum community. Part of me wants to say it isn’t so bad anymore, but the second I start hanging around my yeshiva mates again, I realize that as a non-smoker I’m the odd man out.

123 comments for “Will the yeshiva world ever quit smoking?”