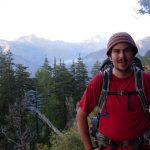 I laughed suddenly, as I hiked briskly up the Pine Ridge Trail into the Ventanna wilderness, I have this habit recently up laughing like a wild man whenever I realize that I am finally living my dream. I can’t believe I am finally living in the west, I am standing about 1500 feet above a raging river, walking along a sandy trail that snakes its way through a canyon, I can see four to five thousand foot brush covered mountains in the distance, I pass the occasional blackened redwood – scarred from a large fire in 2008 – the fading sunlight makes the trees seem more stark against the bright green surroundings.

I can hear the ocean crashing into the cliffs of Big Sur in the distance and my mind is raging with a wildness, one that can only come from a full week of work and the knowledge that I have the ability, the ease to pick up my pack and hike into the woods on a weeknight, this is why I laugh.

My hiking partner catches up, we only have a few miles to go until the first campsite, we can camp there or keep going. My hiking partner is an out of shape high school kid, but so far so good, I hike a bit ahead because quite frankly I don’t like seeing people in the woods much, even though it’s nice to have someone to talk to once in a while.

I daven mincha while I wait for my buddy to catch up, davening in the woods for me is one of the highlights of any jaunt into the wilderness. In general, California has brought me into some kavannah zones I have never experienced, no one could really tell, I’m an inward kavannah guy – I don’t need other cynics like myself looking at me as the crazy guy doing the violent shuckel while waving his fists at the invisible God in the sky. I appreciate the Lord, but in head, in my words, not in my crazy bows and clops. The sun fades into this orange and purple tinted sky as we decide to keep going beyond the first camp site.

We hike another two miles, my head lamp gets turned on, but the full moon is shining down and making the mountains come alive with this stark nighttime beauty. I have night hiked before, but usually in the winter under a full moon reflecting off the snow, never in the summer. I can see my breath mixing with the dust of my head lamp, at the second camp site (when I say camp site, I mean flat area designated by National Forest as camp site, usually a water source close by and a hole with a good seat for a toilet) we see head lamps and some girl asks me who we are, they are down in the ravine, we answer that we are out for a night hike and move on to the next camp site.

We are hiking along and I am singing the little red riding hood song because there is howling involved. There are no bears in these woods, but the last thing I want to bump into in the woods is a mountain lion, I would rather be embarrassed by my terrible renditions of oldies, than be torn to bits by a mountain lion stalking his or her supper. I had the pleasure or displeasure depending on how you look at it to see a mountain lion once. I was lying down on a rock that felt like a lawn chair near Fremont Pass in Central Colorado when I looked up on the scree above me and saw a fairly large mountain lion walking along. The wind wasn’t blowing his way so while I registered with shock that I was no more than 50 yards from a real live mountain lion, I prayed to Hashem, throw up my fleece to make me look larger and started climbing down this cirque while I kept repeating “Holy shit there’s a mountain lion” over and over, between the “God don’t kill me, I won’t look at girls anymore.”

I am not sure what time we actually made it to the camp site, I would say somewhere around 11 or 12, we had left at 6pm and hiked 10 miles on the same day that I had worked a full shift starting at 7:45 that morning. I was kind of shocked that my overweight hiking partner actually made it, with no complaints and a light in his eye. We were at Sykes Camp and although it would have been great to find the hot springs we had come to soak in, it would have to wait until morning. The night was cloudless (I haven’t seen an actual cloud in 4 months) and there were no bugs so I decided to sleep with0out a tent, the ground was very soft and we were about 20 feet away from a swift moving creek.

We woke the next day after 10am, that’s how you know we slept well, in the woods I usually wake at the crack of dawn, but this morning I slept right through dawn. We went off to try and find the hot springs. I like hikes with a goal, a mountain climb, a lake to swim in, but this was my first hot springs hike, mostly because the east coast doesn’t have too much thermal activity and almost every hot spring I have ever been to was built up into a rich mans resort, besides for the drainage ditch hot springs I went to in Costa Rica and the Liard Hot Springs in the Yukon Territory (really cool) the other one’s were resorts.

We hiked along the creek crossing it several times – gpood thing my buddy offered to carry my sandals, I would have refrained due to weight. I have started training myself in light weight backpacking. The ability to go into the woods for two days with a 20 pound pack has made me faster and more able to enjoy backpacking than I ever have. I spoke to some folks in Yoseite who were really into keeping their pack weights down and they told me that many people hate backpacking initially because their heavy packs make them too tired to enjoy the beauty around them. My goal is to keep my pack weight below 25 pounds.

The hot springs are basically a stream of sulfurous water coming out of a cliff, the forest service made little pools out of rocks and sandbags collecting the hot eater on this cliff overlooking the creek we hiked along and we got one to sit in all to ourselves. Sykes Hot Springs is a very crowded place on the weekends, the Ventanna Wilderness is the closest wilderness to the Bay Area and that makes it a hotspot for weekend trippers. I could tell by the amount of traffic coming in as we hiked out that we had been lucky to have it all to ourselves.

I just realized that this is my third backpacking trip this month, when I lived on the east coast – I backpacked 3 times a year. Now if only I could find a lovely lady to come along with me…

← Pedophilia is not against the Torah
Will the yeshiva world ever quit smoking? →

16 comments for “My latest backpacking adventure”