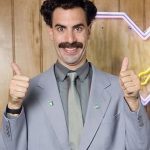 There isn’t anything inherently funny about Tisha B’Av. Yom Kippur is funnier — we clop our chests, all the Rabbis look like idiots in their white canvas shoes and suits and it’s so boring that in yeshiva we ended up in our dorm rooms debating if it was worse to jerk off or eat on Yom Kippur. Some people did both to pass the time, but Tisha B’Av lacks the restrictions of Yom Kippur and the seriousness is overshot by hours spent watching epic movies and complaining about the humidity (not in California luckily.) and it just isn’t as interesting as Yom Kippur.

The only part of Tisha B’Av that really bodes interest are the UN Rallies that are great places to check out the ladies and Eicha at night when everyone is sitting on the floor and you can look up girls skirts. Other than that, Tisha B’Av kind of blows. It sucks so much that when Moshiach comes we will still have it. It sucks in terms of interest and the fact that shit went down on this day that has really screwed the Jewish people for centuries that there is not one video on You Tube that is to do with anything funny about Tisha B’Av.

I am sure some chassidim must find something happy and joyous about Tisha B’Av – beyond the classic “they tried to kill us, but we’re still here” jargon that fits most holidays because if that were the case, shouldn’t we be eating while we sit around watching Operation Thunderbolt, Schindlers List and School Ties over and over again?

I have to work during the whole thing anyway, which makes it much more worse for me than most people.

14 comments for “When all is said and done, Tisha B’Av just isn’t funny”