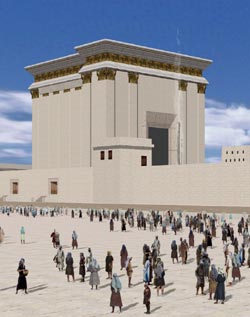 A few years ago I was a campus Rabbi for the Jewish Awareness Movement at USC. One of my primary responsibilities was to lead large groups of Jewish college students on inspiring trips to Israel.

One episode has inspired me since the moment it occurred and it is directly related to today’s Tisha B’Av fast.

We always were sure to take the students on the Tunnel Tours of the Western Wall. For me, it was incredible to see the beauty and grandeur of the gigantic white stones at the original base of the Western Wall. The Talmud in Sukkah tells of the beauty of the Second Temple that Herod rebuilt. It is hard to imagine such beauty when we see the above ground Western Wall today. Erosion and time have taken its physical beauty. But underground the stones are a pristine white and appear good as new.

Our tour guide was always the world renowned Esther Schlisser (who has since passed May Her Memory Be Blessed). Esther Schlisser was a one of a kind woman who took these tours very seriously. She allowed no talking, no photographs of her and she brazenly single-handedly led us through the Arab Quarter at the end of the tour during the second intifada.

We began the tour sitting in front of a really cool model of Herod’s Second Temple and with the magic of technology it transforms into the current Old City layout. The route of the tour took us deep down to the lower Western Wall base stones and along the Wall below the Arab Quarter. What we see of the Wall today, is a fraction of the size of the original Wall.

We finally arrived at my favorite spot. There is a section of floor from the Second Temple era that has been excavated and this is where Esther had us all sit on floor. I really enjoy touching history, and walking and sitting on the floor where our grandparents sat 2000 years ago is very powerful for me.

Esther then begins to tell us where we are sitting and the great men who must have walked these same cobble stones. She then begins to cry. Esther tells us the following (paraphrased to the best of memory):

“These stones are alive!

My husband died many years ago. When he died I was sad. I cried for days, for months, but eventually, I began to heal and I no longer cry for my husband. This is because my husband is dead and we cannot cry over something that is dead forever. I miss him terribly, but I do not cry.

However, I come to this spot, the floor right in front of the Western Wall of the Second Temple at least once a day for the past 10 years. Every single time I come here, I cry. I cry that we are exiled and that we cannot see the Temple in its true grandeur and I cry that we are at the mercy of the nations of the world and we cannot rule ourselves as per the Torah’s command. Jews have been crying here for centuries. We will continue to cry until we are redeemed from this exile.

There is only one way to explain this. The stones are alive. The Wall is alive. There is a soul in the bricks that lives. Its voice is small, it is weak, but it is alive and that is how we can cry centuries of tears for a destroyed Temple. The Temple may have been destroyed but still, it lives.”

A very powerful experience and one I think of very often.

← When all is said and done, Tisha B’Av just isn’t funny
Man is suing Rebbe for telling him to buy Toyota →

6 comments for “Mourning the Living On Tisha B’Av”