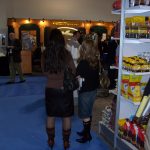 I don’t know how many times I will have to reiterate this, but a Hot Chanie doesn’t actually have to be hot — many aren’t. It’s more of a look and attitude that make up the Hot Chanie lifestyle. There is something about looking hot, being bitchy and trying to maintain tznius guidelines even though we can see your panty line and your sheitel makes you look many times hotter than your regular hair.

Leather Boots: I used to think the leather boots were a phase, but they have lasted the test of time. Unlike those long sweaters that tied in the front, mini backpacks and furry boots that were all popular in the hot Chanie crowd at one point or another – tall leather boots – also known as hooker boots are key to being a hot Chanie.

Sushi: The best possible Hot Chanie viewing is always at a Sushi place midday. Try Central Ave in Cedarhurst for the best views. While their husbands are off hocking at the nursing home or off on a Hatzoloh call, the wives are popping little $1 morsels into their mouths and talking about jewelry and the best sheitel machers. You can thank Hot Chanies for your ability to get sushi in practically every kosher place to eat in New York.

Big Black SUVs: Hot Chanies are usually terrible drivers and the fact they always have a cell phone on while trying to maneuver big black behemoth of cars into narrow parking spots on Coney Island Ave doesn’t make things better. Hot Chanies have a penchant for ignoring everyone around them, they like being the center of attention, even if that includes stopping in the middle of an intersection to chat from their high horses with someone they know walking down the street. I have seen Hot Chanies make stunt like moves to pull over in order to yenta-ize with someone on the sidewalk or in another car – they seem to be oblivious to middle fingers and horns.

Sexy Sheitels: I feel like the Jewish Press must be targeting Hot Chanies because they always have these super sexy sheitel ads. Part of the Hot Chanie costume is the sheitel. It must be really long, wavy and super hot. Many Hot Chanies become just regular old Fraydes when they take off their sheitels.

Leather Skirts: If you don’t ride a Harley you have no business putting on a leather skirt, yet I see Hot Chanies rocking the leather skirts. It’s just gross. They should stick with those tight denim ones. Leather is taking it too far.

Fruit in their salad: Don’t me wrong, I’m down with fruity colorful salads, but to throw mango and strawberry into a mayo dressing type salad is taking it too far. Hot Chanies need to make everything sexy and seemingly healthy. They also seem to be obsessed with craisins and those packaged fried onions.

Hocker Husbands: Any Hot Chanie worth her weight in salt needs to have a bluetooth wearing, Lexus driving husband who makes enough money to shower their non-educated, non-working sushi eating wives with the finer things in life – like marble columns on their Tudor home, or those fridges that look like cabinets – Hot Chanies love the cabinet fridge. Seriously. folks, your husband needs to be one of those clean shaven guys that wears a 4 piece black velvet yarmulke with no rim, he should rarely wear a hat, clip his cell phone to his belt and never give his wife much attention because he’s always making deals.

Yeshiva Boys Choir: Admit it, those little boys are cute and Hot Chanies like cute boys. They always have cute kids for some reason and I feel like they dream of them joining one of these pathetic frummie boy band choir operations in which they lip sync concerts on chol ha-moed Succos.

Saying Uch: Is it just me or do you hear Hot Chanies say the word uch way too much?

Complaining: I think the biggest complaint is about the food being cold, but usually when you see a Hot Chanie she’s simultaneously talking on the phone to someone while complaining to someone at the counter.

Making shidduchim: I think the rumors of wife swapping are simply untrue and fictitious, but I definitely know that Hot Chanies like making shidduchim because they get to live vicariously through their friends ordeals and the sexual tension is good too.

Miami: They love Miami and their hocker husbands also do – poor wannabe Hot Chanies end up in the Catskills.

Snoods: Sure we have all heard stories of those women on the beach in Miami who wear a snood and a two piece bikini, but they obviously aren’t Hot Chanies. Real Hot Chanies wouldn’t be caught dead in a snood. Maybe a beret, but definitely not a snood.

Modern Orthodox People: Next time you’re around a bunch of Hot Chanies mention someone modern and they all have this very negative connotation of Modern Orthodoxy, like it’s a blemish or something.

Becoming Frumpy: I haven’t actually figured out what this means, but this is every hot frummies worst nightmare: to become frumpy. I think it’s the frum way of saying pot bellied and middle aged.

Going to shul: Very rarely have a seen a Hot Chanie at shul — maybe I’m going to the wrong shuls.

Loose fitting clothing: No matter how silly they look in their tight outfits, Hot Chanies need form fitting clothes. I have noticed that Hot Chanies don’t seem to mind muffin tops with crumbs on them.

Out of Town: They have a disdain for out of town, they say things like “she’s so out of town” or “you know it’s very out of townish there”