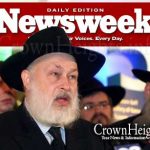 I love America. G-d bless America. It’s the only country I know that does not have a chief rabbi, thanks to a very divided Jewish community, and a government that is constitutionally barred from appointing religious leaders. Fortunately, elements of our so-called fourth branch of government, specifically Newsweek Magazine, has decided to anoint a list of 50 rabbis that it considers to be the most influential in the country. Did American Jews ask Newsweek to choose a Chief Rabbi for us? Do we need one in America?

The list appears to give very little on details justifying the picks, and often, the same names reappear year after year. It is disappointing, because in contrast, the Jewish Week’s annual 36 Under 36 is much more comprehensive in its picks, and the same name never appears in two consecutive years. Each pick is given a detailed profile, that helps readers understand why he or she was chosen for the list. While I am upset that my friend Heshy Fried did not make the cut this year, I find 36 Under 36 to be a far more superior list than Newsweek’s 50 Rabbis.

Let’s consider the top dog, Rabbi Yehuda Krinsky of Chabad. “As the leader of the Chabad-Lubavitch movement, Krinsky is the contemporary face of the Hasidic branch,” writes Newsweek. That’s funny, because unless I’ve seen Rabbi Krinsky at public rallies, parades, or Tweeting his thoughts, it’s a stretch to say that he is as public as the Rebbe was in his lifetime. What has Rabbi Krisnky done in the past year anyway? Thankfully, the fine journalists of Arutz Sheva approached the rabbi and received some answers.

The second place honor goes to Reform rabbi Eric Yoffie, who “represents 1.5 million Jews in more than 900 synagogues in his role as president of the Union of Reform Judaism.” Really? Does Yoffie truly speak for every Reform Jew in America? Are there polls that back up this assertion? Does it matter? He’s planning on retiring soon, anyway.

From there, the list goes on with mostly the same names as last year. A few bright spots include Conservative rabbi Morris Allen, in his first appearance on the list, for inventing Hechsher Tzedek. Riverdale rabbi Avi Weiss shot up on the list to 18 from last year’s 38th place, thanks to the “rabba” controversy that he ignited. The rabba herself, Sara Hurwitz, also made the list at number 36. Not far from where her mentor was last year.

If Hurwitz can be included on the list, why not include any self-proclaimed rabbi then? Why not include rebbetzins, chazzans, or anyone else who uses the pulpit for a position of leadership in the community? Remember, before 1840, The U.S. did not even have any rabbis. Shuls were led by cantors, and self-described “Jewish ministers” or “reverends.”

In short, this Newsweek list should not be given much serious thought. If Newsweek really cared about the direction in which the American Jewish community is heading, its criteria would be based on innovators- those struggling to defend, reinterpret, change, or reinforce our traditions. Those who are helping keep members in the fold, attract new members, ease the transition for converts, grapple with contemporary issues like gays, settlements, and intermarriage, those building new communities, or keeping existing communities relevant. Instead, it is based on superficial items like synagogue size, political connections, and name recognition.

This is similar to how secular Jewish leaders are often ranked by their wealth and philanthropy more than their actual leadership qualities. This inevitably creates a list crowded with Bronfmans, Steinhardts, Lauders, and Bloombergs, at the expense of less wealthy but equally passionate and active individuals. While I can barely afford to give a chai for an aliyah at my shul, I work hard to attend pro-Israel rallies, organize thought-provoking lectures, invite people to my home for meals, and other good work. But because I am financially poor, I doubt I’ll ever make any of these lists of top Jews who care.

The Newsweek list is diverse on denominations (including leaders of the numerically marginal Jewish Renewal and Kabbalah Centre) but almost monolithic Ashkenazi. Where are the Sephardic, Bukharian, or Syrian rabbis? Why isn’t my community represented here?

← Do pride parades hurt the gay community more than help them?
Stuff Hot Chanies Like →

33 comments for “Newsweek’s Most Influential Rabbis”