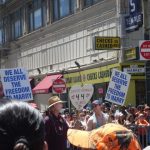 The “show-your-penis-in-public”, assless chaps-wearing guys are for the Gay community what the Haredim are for the Jewish community: a loud and visible minority who takes everything too far and gives the rest of us a bad name!

I received this comment on the post about my experience in the San Francisco Pride Parade and I sort of agree with it. I am not gay so I could never know the horrors of being in the closet, but I do know that many people think wrongly that Gays aren’t everyday citizens and they are all a bunch of sex crazed maniacs (in yeshiva I was taught that gay people had tried everything else and had used up their taiva for women). Even though this is far from the truth, I feel like the haters get ammo from events like Pride Parades, which are wild parties, but is one able to judge from a party, similarly to the way one can judge an entire group of Charedim by the fact a small minority of them will burn dumpsters in protest of something.

Then again, can’t we cut the community some slack, many of them have been forced by society to be in hiding. I am not sure if any of you have any good friends who are in the closet or have been in the closet, but it’s absolute hell from what my friends tell me and it seems like a pride parade is a chance to be proud of who you are a let loose.

While there were naked guys and gals walking around and lots of people slapping butts, there were plenty of regular folks just trying to show their support. I found the float of senior citizens who were gay very nice, as well as the gay policemen and women walking with their partners very nice as well. Most of the parade actually seemed like one big advertisement, as companies such as Kaiser and Virgin Atlantic showed off their names with rainbow flags.

← Auschwitz Dancing Video: This made me smile and pissed me off at the same time
Newsweek’s Most Influential Rabbis →

25 comments for “Do pride parades hurt the gay community more than help them?”