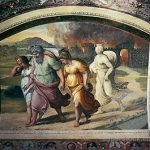 I remember the first time I learned of Noah and his sons, I must have been in grade school and we were taught that the sons uncovered his nakedness, Sure we all giggled, imagining that his sons were walking through the freshly planted vineyards one day and one said to other – “Dude let’s pants him” – what else could uncovering his nakedness mean anyway. Logical if you ask me, we were of the age where we would probably have done the same thing and than laughed at our friend with his pants around his ankles. It was totally understandable for God to be angry with them because you don’t pull down your old mans pants – that was just wrong.

Years later, I learned that it was more like a gang bang, but how exactly do you teach about these so called great ancestors of ours having a drunken gay incestuous gang bang? I mean, you could probably say something like, the Noah family rode in steerage during their voyage and it was hard on them, they just needed to let loose and their evil inclination took over. Couldn’t imagine the little midrash says saying something like that, I wonder if 613 Torah avenue ever had the scandalous stories in the subliminal messaging that was hidden inside their tapes.

Come to think of it, I always knew about Lot’s wife becoming a pillar of salt, but they mentioned anything about the drunken incestuous “could have been a gang bang, but everyone waited their turn” event with Lot and his daughters. The story did prove that the first thing on people’s minds, even thousands of years ago, after seeing the hand of God and worlds destroyed was always sex. Coincidentally, this means that the Rebbe could never be moshiach since everyone worth their weight in salt in chabad needs some Gezhe and it’s quite obvious that Lot’s daughters didn’t have gezhe (chabad’s way of saying yichus) but would the Rebbe admit to being from such a relationship, but if he wasn’t a descendant, how could he be moshiach? Either way, we didn’t have Stone Chumashim back in the 80’s so I never learnt of Lot and his daughters.

I got thinking about all of this, because I was sitting at the shabbos table last week and the 8 year old daughter of folks I was staying by got up to give a devar torah about the story of pinchas and I almost choked on the marinated mushrooms I was eating. I knew that this was the Bay Area and people are very open to their children about sex, but the story of Pinchas is pretty extreme, whoever could pull off teaching an 8 year old girl about this was a wizard.She basically spoke about how one of the leaders married a non-Jew and everyone knew about it, hence the reason he was killed, I wondered if she and her classmates had those coloring book pictures of Pinchas and his spear.

For all of you heretics who don’t realize that the Torah is full of some awesome stories like Pinchas, Pinchas basically stabbed a dude and his one night stand with a long spear while they were in the conjugal act and held them up as a specimen for all of Klal Yisroel to see. It must have been pretty cool and I can’t imagine him finding a heter to hold up a naked chick on a spear for everyone to see, when people start riots over sitting in the front of a bus, but things were different back then.

How did they teach you “adult” stories when you were kids, or how do you teach them to yours kids?

100 comments for “How do kids learn about “adult” stories in the Torah?”