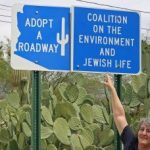 Jewish groups around the world are patting themselves on the back after proclaiming that they will begin to mourn the onslaught of Global Warming during the traditional during the nine days period of mourning about to begin this evening. The groups which traditionally do not celebrate the loss of the Temple due to its conflicts with animal rights issues, have proclaimed that this year they will mourn the loss of the environment instead, by refraining from using their pools, showers and eating meat.

We are going to have a great impact on the environment said Julie Fishman-Anderson who leads the group J-Environment. “I don’t think people understand the fact that the cattle industry is the biggest producer of greenhouse gasses and is ushering in global warming as we speak” When asked whether she would give up meat entirely, she broke in about not taking showers for over a week and how that would reduce water consumption greatly.

As expected many orthodox groups are comparing this to the hechsher tzedek, just another way for unknowledgeable Jews to twist the meaning of something to their liking. We spoke to many different Rabbis who told us pretty much the same thing, these people are a bunch of hypocrites who twist ancient religious practices to fit their liberal ideals. Orthodox Jews traditionally do not believe in Global Warming, since God stated in the bible that he wouldn’t flood the world again, many orthodox Jews understand this to mean that a rise in sea levels is impossible. Until the world can produce a 15 seat hybrid van, it’s doubtful the orthodox community will ever cut down on fuel consumption to transport their large families to the pizza store every Saturday night.

Traditionally the nine days are the culmination of a 3 week period of mourning, the end of the nine days is called the ninth day of Av or Tisha B’Av, in order to mourn for when the temple was destroyed orthodox Jews traditionally sit on stolen milk crates, attend rallies for Israel and watch a lot of long epic movies – many Jews actually have movie marathons to pass the time, Lord of the Rings, Star Wars and Beverly Hills Cop series’ are Tisha B’Av favorites.

← Youtube Guy calls me a “Funny Ass N—“
How do kids learn about “adult” stories in the Torah? →