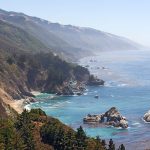 Having no internet where I live has its advantages, I get sleep at a good time and have been able to make it to shul in the mornings more often, the disadvantages are that you get to suffer with less blog posts than normal. I decided two things after my little backpacking trip to Yosemite last week, one that I would try and do more backpacking more often and two that I would try to lessen the control that this blog has over my schedule.

For the most part I have been true to my word, instead of scheduling posts I have just been writing when I can get to an internet connection, rather than wracking my brain for a good idea and pre-scheduling posts for when I would be at work or out in the woods. Wednesday was the last time I was at my computer because on Thursday night I decided to try out my new super-lightweight backpacking tent on a mini overnight.

I got out of work on Thursday at 3:15, drove 2 hours to Big Sur (which is possibly the most awesome area on the California Coast) hiked 8 miles into the Ventanna Wilderness area, camped out and then hiked another 10 miles out on Friday morning. Thus proving that while working 40 hours a week I could still spend at least one night a week in the wilderness. By the way, my tent is a freestanding solo tent that weighs about a pound if I don’t use the spikes (not nec since it’s freestanding) and rain fly (it doesn’t rain until November) Now all I need is a titanium pot and a wife who wants to do this sort of thing with me.

So in truth, I miss blogging twice a day, but until someone donates a computer, or a I suck it up and pay for internet access in my house – the blogging – may or may not be sporadic. I do enjoy going back to roots and merely writing whenever I feel like, oh and not paying attention to stats is awesome.

10 comments for “Don’t worry I’m not dead, my internet is just down”