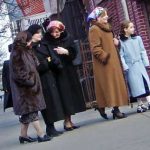 This might be the making of another series, but let’s start with just one. Some of these were taken off of my facebook status. No matter which way you cut it, these will be corny, but it’s fun and I am sure you all can come up with some really good ones.

Yo Momma is so Frum that…

She washes her hair with a tichel on

She won’t go into yichud with her own children

She visits the mikvah when she cuts herself and it bleeds

She blindfolded her sons when she nursed them

She kashered her hair when the Indian hair controversy went down

No one’s ever seen her

She has sex blindfolded

She uses a piece of plywood with a hole in it, instead of a sheet

She doesn’t eat any fowl (chicken, turkey, duck) because of machlokes

She checks references for play-dates

She lives in a separate house during niddah

She only wears shabbos robes with shoulder pads

She says asher yatzar every time she farts

She is careful never to eat a food that resembles a male private part (bananas, popsicles, corn on the cob etc…)

She wears those sunglasses that blind people wear, claiming that only her husband is allowed to see her eyes

Now you tell me why Yo Momma is so Frum?

← Women who say shema should put on talis and tefillin
Don’t worry I’m not dead, my internet is just down →

50 comments for “Yo momma is so frum”