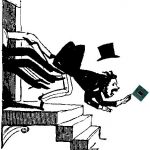 I was thrown out of the dorm in my last year of yeshiva for selling a stack of maxim magazines to this kid we nicknamed freezer boy after this incident. He was hiding his magazines in the freezer, and one of my classmates who knew all the spots from personal experiences had found the goods in his mini fridge. Instead of giving me the full boot, I got the dorm boot ? which worked out pretty well in the end. I got to live in a normal house and eat normal food and I got to keep the money I had made from selling this kid these Maxims that I had gotten for free with my frequent flier miles. They had been shipped to my house and still had the stickers on them. I wondered how the rabbis felt about the fact that my father didn?t mind my reading softcore porn.

When you attend a reject yeshiva as ours was called, you get to meet a lot of rejects. In the yeshiva world a reject is not necessarily a reject. It merely means that they have been thrown out of multiple yeshivos and are at the end of the line. In my day, yeshivas like Rudinsky (since cleaned up) Adelphia and Hamilton were all considered reject yeshivas. Priority One was in its beginning stages, because the frum community only discovered that kids liked sex, alcohol and drugs in 1998 when the Jewish Observer did an expose of kids who were saying Israel instead of Eretz Yisroel and wearing those small black velvet yarmulkes with their bangs tucked underneath.

One of the joys of yeshiva was when new kids randomly showed up after a middle of the year out Shabbos. I remember expecting new kids after bigger breaks like Succos and Pesach and if there weren?t several new faces at shacharis the day we got back, I was disappointed. I would always go up to the new kid and ask him from where he was thrown out and much of the time the answer sounded a bit like ?where haven?t I been thrown out of?? I would try and pry for details, was it girls, drugs, drinking, room searches, movies?

I watched my yeshiva’s philosophy on kicking kids out change over the years. I did notice that the wealthier kids definitely had it easier, especially the kids whose parents happened to know one of the hanhalla. When I first showed up in Rochester, it wasn?t only a reject yeshiva, it was for misfits like myself, I was from a modern orthodox home, but my father didn?t like how modern orthodox yeshivas focused on Israel and not enough on gemara. I?m sure he had dreams of me going to Lakewood like he did, but I was a terrible student either way you put it. In my ninth grade year, the yeshiva took anyone and getting thrown out was tough. They just gave you a kenas or sent you home if you were caught smoking or going to the movies. If they caught you with porn, one of the Rabbeim would give you mussar about it.

Naturally, having grown up modern, I thought that our yeshiva was the strictest it could get. With rules like no backward hat wearing and no listening to recorded English music, I wondered what the other yeshivas must be like if kids were getting kicked out to come to our super strict yeshiva. Since we were part of the Chofetz Chaim system, we got a lot of Chofetz Chaim rejects. We even got kids who were thrown out of other yeshivas for going to the library or reading secular books. While in yeshiva I practically lived at the library and wondered what kids who didn?t read did. I had a handheld TV that I watched late at night, but it was lame and only cool because it was assur.

I kind of feel that a lot of guys did certain things because it felt cool to break the rules. I highly doubt that anyone was addicted to cigarettes and 14 years old, yet guys repeatedly got caught and did it over again. For the record, to this day I have never smoked a cigarette. I would say that over 50% of the guys in my high school smoked. Even the rosh yeshiva was a smokestack until he got cancer.

One of the popular things to do was to do and see laser light rock shows at the planetarium. Come to think of it, I wonder if the yeshiva knew that it was a bunch of kids going to watch the Wall while looking at lasers. I?ve seen these shows sober and they are kind of lame, so what are they to expect? I have no idea how the actual story went. I was shocked that kids in my yeshiva were doing drugs, but everyone got stoned, went to the Pink Floyd laser show and suddenly for the next few years, drug testing was the norm, as was consuming massive amounts of cranberry juice and other detox items bought from the hippie store down the block, right after long out Shabbosim.

Ironically, even though I have looked like a skateboarding stoner since I was 13, I was never given a test. I would walk by the Rabbi giving them out and say nonchalantly that I wanted a free mountain dew so it would help me pee for the test, the rabbi would always say he had no idea what I was talking about. They never tested me and even though I was friends with all the drug kids, I never actually tried anything until I was in my mid 20?s.

In my later years Rochester tried unsuccessfully to clean up its reputation. They tried accepting fewer kids and making standards tougher. Fortunately, I still have my yeshiva bum street cred. I can say I went to Rochester and suddenly I have respect from the Our Place and P-1 KIDS who all ask me if I know some kid named Stein. I remind them that I graduated 10 years ago ? at the beginning of the “kids at risk” crisis.

← Do you listen to music during the 3 weeks?
Video of Israeli soldiers dancing on duty in Hebron →