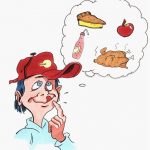 Studies show that when it comes to minor fast days like today, the majority of people do not know what they are about. In fact, most people merely focus on trying to pass the time by watching movies and sleeping. Rarely do people focus on the meaning of the day itself and why they are going through the motions of fast for such an important event.

We sent out a street team to local neighborhoods and found that most people didn’t know exactly why they were fasting, they just were, we at FS-News like to call it Lishmah By Default, people are doing it for the sake of doing it, because it said so – even though they have no idea why.

We also found that many people loathe fast days, they view them as a major thorn in their side, a plan by the rabbis to exert power over their flock by instituting fast days for remembering events which mean nothing to them several thousand years later. Many in the study expressed frustrations at having to fast for a mere siege, when events like Global Warming, the capture of Gilad Shalit and the election of President Obama were all very worthy days to fast on.

Many people, who don’t officially watch movies, break that habit on fast days. We found all types of orthodox Jews going to the theater in honor of Tisha B’av last year and again we expect this to be the case this year. Netflix has seen a rise in the rental of Epic Films such as Braveheart, Titanic, Waterworld and The Lord of The Rings due to their lengths.

Apparently some folks think that fast days are psychological, you aren’t actually hungry, the lack of food makes you to weak to do activities and therefore you become lethargic and bored and many bored people have the habit of eating to lift their boredom, so all in all it may be psychological.

Did you know that some vegans are opposed to fasting in honor of the beis hamikdash that was destroyed due to their vehement opposition to the concept of a temple devoted to killing animals for no reason, I guess we’re lucky the aphod was only made of stones and metals.

We were not surprised when the survey revealed that everyone’s favorite part of the fast was when it was over and they got to feast on bagels or eggs, the two breakfast meals of choice by Jews.

← I feel so cool
Frum Satire is on vacation →