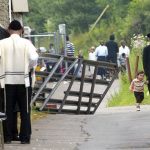 Over the years I have written a lot about the Catskills phenomina, this is the first post I ever wrote on the subject and it was originally posted on June 25, 2006.

I am grinding up a steady hill under a canopy of recently sun shower soaked trees. I shift into 4th to give my car some oomph, on the next downhill I come quickly on a blue minivan clumsily trying to maneuver his behemoth of a car down without killing all its occupants. I can see many children in the backseat, and its proud bumper sticker declaring that Israel is G-d’s gift to the Jews. In the distance a silhouette of a Chasidic man clutching the hands of his two children walks awfully close to the side of the road as if awaiting the inevitable death to a passing minivan.

These figures seem almost like black picket fences as I pass many of these strange looking figures in the early evening light. Some wear their reflective orange vests making them appear to be Chasidic construction workers- I can almost imagine a sign proclaiming “my tatti works here” or “give yankel a brake”. At least the women wear brighter colors making them less of a target for my mirrors and front grill. The women with their bright colored turbans covering their clean shaven heads- other than dykes, anti conformists and African women, I don’t know of besides Chasidic women that take the plunge into shavedom. I do wonder what they look like or how they do it? Is it some sort of pagan ritual where they all take Peyote and dance around in a cave singing hymns and saying kabalistic prayers, or do they tie them down, ignore their screams, and take the knife to their heads. Ah, the mystery of the different sects of Judaism.

The car in front of me is obviously having a hard time navigating on country roads that aren’t as wide Ocean Parkway. Or maybe they are stunned by the trees and grass which some of them may have never seen before. This car is hugging the shoulder and trying to go as slow as possible both up and down the hills- having to keep my car in third gear on a winding country road is getting me frustrated, but I haven’t road raged in years and I am not about to start screaming at my fellow Jews. The road suddenly turns flat and fields of green accompanied by a looming dark red brick penitentiary in the distance. The immediate sign proclaiming speed zone ahead with barely enough time to decelerate  from 55 to 30 under normal circumstances,  a town suddenly appears on the horizon, though it is a small dilapidated one,  it greets my eyes. A basketball court is on my left, and there’s an HSBC bank and the stoplight. Some towns don’t even have stoplights- many of the people who come here wonder – how one can manage rush hour without a stoplight. Of course around here rush hour stereotypically consists of nothing more than a couple tractors and school buses. Rush minute I will call it- or maybe Saturday nights in the summer, then that is worse then rush hour.

I am greeted by a sign in bright green that welcomes me to Woodburne- home to the penitentiary and not much else- oh the Neversink River, which I attempted to kayak down only to get stuck on its shallows a few hundred yards into my journey. It was worth the shock value of a few dozen frum children on the side of the river staring at the crazy kid boating down the river and then walking back up carrying his boat and thben proceeding to put on my shirt and tzitzis.

The town greets me with its sullen storefronts, almost bringing me back to the towns of Nebraska and New Mexico- not quite as abandoned and lost but, almost there. They appear to have been abandoned only to be unwillingly resuscitated by the throngs of summer folk who couldn’t care less whether the roof was sagging or the sun baked signs were barely readable. These patrons cared more about the functional qualities of these buildings as temporary havens for discounted Hebrew books and a slice of kosher pizza, rather then their appearance to the weary traveler who may pass by and not even realize that living things had temporarily set up a thriving business inside. The non-knowing passerby may think that these signs “Woodburne Kosher Pizza” or PJ’s Game Room” were of a past era- one in which this town attracted throngs of travelers looking for a respite on the long store free drive between Liberty and Monticello. In better days this would have been a bustling main street with boutiques and eateries over crowded with vacationers from downstate and upstate alike. To me and countless others this town brings fond memories of those times spent on the corner gazing at 16 year old girls while scarfing down a hot slice of eggplant pizza sprinkled with oregano. Those hot summer nights making fun of the frummy rebels scattered about with their school spies seeing what they are up to in the summer. Oh how I loved to watch all the guys smoking and talking about how cool Metallica was and the girls trying to hike their long street sweeping skirts up to show a little leg. Those were the days.

It is interesting because this town looks exactly the same. Besides the raise in prices 2 bucks for a piece of pizza is insane man (who knew that it would ever hit $3 and and now that’s the norm)- the stores remain shabby, dirty, smelly, bad service, pushy New Yorkers, strollers clogging the entrances – the more the better because Jews must procreate or we will die as a nation, oh and the numerous flies buzzing around, screaming children with their uncaring parents trying to juggle who ordered what- and my favorite thing is a barrage of Yiddish speaking people mixing with the “nu vare have you been?”