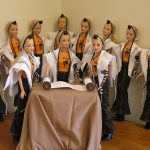 The Tenth Man Union is calling is going on strike after multiple successful minyanim have been ongoing just as one of the union members arrived. The Tenth Man Union is a large group of folks from around world who are known as the ones that small town rabbis call when they are in a minyan bind.

Traditionally about 5 minutes before the latest time to say a heicha kedusha mincha, the rabbi will approach one of the shul machers and ask him who they could call. That’s when the Tenth Man Union comes into play. They call up one of the members and he shows up in the nick of time and is awarded with feelings of happiness at being the tenth man.

The problem started a few weeks ago and it seems to have perpetuated into an all out crisis. In multiple cities, union members were called to minyanim, but by the time they had gotten there the davening had already started. It appears that union members were not the only ones called and since the other minyan makers showed up before, the union members felt scammed into coming to shul when they weren’t needed.

Tenth Man Union members called for strike and demanded that only union members be allowed to make minyanim so that they don’t show up to a minyan thinking they are the tenth man when they may be the 12th man. They picketed several shuls refusing to enter until the scabs had left and rabbis agreed to only use union members for minyan making from now on.

3 comments for “Tenth Man Union calls for a strike”