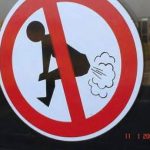 I standing minding my own business, trying to get through the part of kiddush levana where you are trying to catch up to everyone saying shalom aleichem to each other when suddenly my nose was assaulted with something evil that came out of your tuches. I was holding the kidduch levana sheet and I almost dropped it, as I instinctively clutched my throat and grabbed for air. I seriously couldn’t breathe and lost all kavannah on the spot.

I wonder if the bais din shel malah would try you for gezel kavannah, why shouldn’t it, it seems just like gezel shaina, you took something from me that I could never get back. I was deeply involved in the boruch yotzrech portion of the prayer, davening so that I could live to attend another rosh chodesh gala kiddush and you had to put an end to it.

I could tell I wasn’t the only one that felt robbed, I tried to give you the benefit of the doubt and wondered of the hashgacha prutus of the situation was that you hadn’t farted while lighting the havdallah candle, because God knows how much methane gas you had released into the atmosphere. I could see others gasping for air as they choked out shalom aleichems and wondered who the culprit was.

It surely wasn’t anyone of the two black hat wearers in the crowd, they definitely knew the halachos of farting while davening, could it have been you in the dark suit and purple shirt, or maybe it was the professor in the ballroom with the candle stick?