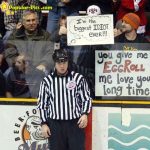 So I have to admit that I wrote something really stupid and wrong last week. I wrongly accused 100,000 Charedim for holding a rally in the name of segregation as the article posted on Vos Iz Neias stated, when in fact they aren’t marching for racism at all.

I decided to ask someone I knew who would be following the case what was going on, because when it comes down to it, the media is full of crap. It sounds way better to accuse them of what on the surface looks like “racism” I had no idea sephardim were a race, but regardless, if it bleeds it leads holds very true in this case.

I didn’t bother researching the topic like a good journalist or honest blogger would do, jumped to conclusions and in my haste to bust out a post that would get some interesting discussion going before I left for work on Thursday afternoon – I put up an inflammatory and wrongful post without knowing my facts and I am truly sorry for that, in fact I pretty much felt like the biggest ass when the Rabbi I was eating at this past Friday night explained the situation to me and I was seriously ashamed of what I had written, I asked numerous people and they said to leave the post up because only cowards remove posts (I guess I’m a coward because I have probably removed close to 50 posts from this here website in the course of 4 years)

In a nutshell the story goes as follows: This is a girls school in which 1/3 of the school is made up of daughters of baalei teshuva, one girl came to school one day dressed immodestly – she was sent home, but refused to leave and eventually parents said they were going to take their kids out of school if they allowed immodestly dressed girls at the school. (many religious schools receive state funding in the State of Israel, but since it’s a theocracy this is normal) The case made it to the supreme court – which told the parents that if they don’t send their kids to school, they will go to jail, these parents stood up for what they believe and were thrown in jail over not sending their kids to school.

The rally was held in protest of sending parents of small children to jail for what seems like their religious beliefs. The rally news stories were spun in such a way that it was sephardim versus ashkenaz and that these folks were rallying in the name of segregation, when all the parents really wanted was to separate the kids from different religious back rounds – which is common in almost every yeshiva.

The Muquata has a very good piece on this story.