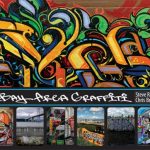 One of the first things I was told when I moved to the Bay Area was that the Jewish community was way ahead of its time. The first interesting thing I noticed was that the Berkley Chabad and the left wing modern orthodox shul switched off for minyanim. Instead of trying to hold down two daily minyanim in the small orthodox community of Berkeley, the Chabad would hold mincha and maariv every day, while the modern shul would hold shacharis. I have been in too many communities that tried unsuccessfully to hold down more than one minyan because they couldn’t get over their differences.

I was blown away when the Rosh Kollel and the Director of the community Kollel both added me on Facebook. Then I learned that everyone was on Facebook, something to which I am not used. I am used to yeshivish people telling me about the evils of Facebook, yet here in the Bay it’s almost rude not to be on Facebook. Tonight I went to a weekly mesilas yesharim shiur only to find a full fledged barbecue going down and sefarim in sight (I was kind of shocked at the madrega I was only to be disappointed to see several attractive college gals and free food, rather than some fire and brimstone mussar.) The Rabbi running the show said it was all over Facebook.

Then I was invited to go sit on a panel at Twitter that was a shul sponsored event on Jewish ethics and the internet. There were Jews of all stripes there and many Chabad and kollel families showed up as well. Where else could I go to modern orthodox sponsored event and see these people there? I was so used to going to separate events for Chabad, modern, yeshivish, reform, etc…

When I had yartzite I stopped by the Kollel also known as the JSN (Jewish study network) for early mincha and I found that some of the more frum Stanford students would come there to use their high speed wireless network and learn as well — totally cool.

I had the opportunity to attend the annual dinner of Emek Bracha, the largest orthodox shul in the Bay Area, located in Palo Alto. Emek Bracha is a strange shul. The rabbi is a black hat intellectual fellow and the congregants are Israelis and Kollel Rabbis with a few random dudes thrown in the mix. For all intents and purposes it’s a right wing modern orthodox shul that does not sway away from halacha. I was shocked to find that one of the speakers was the Stanford Chabad shaliach. I was so shocked because I had never seen a Chabadnick at this shul and it’s a very snaggy place. Then I noticed that all of the local Chabadnicks were there. One or two of them would show up, but to have one be a speaker, woa.

Let’s not forget about the Mission Minyan, a group of egalitarian Quasi-orthodox types, but everyone is friendly with folks in the Mission Minyan. When I mentioned to several “frummies” that I had been to the Mission Minyan and was down with it, they didn’t bat an eye -– maybe everyone’s so politically correct out here –- but I was pretty shocked by that. It was completely normal for me to have attended it. In NY I would have gotten some real mussar.

I was sitting in Am Echad in San Jose one Shabbos and I picked up what looked to be like some sort of Academic Journal. What I had found was a fully edited journal of thought for each of the Jewish holidays put out by the JSN. What I found to be so shocking was the amazing quality of writing and editing. Each page also featured footnotes with all sources and the language was not that of frummies, but that of the kind you would read in an academic journal. I tried to convince the executive director of the JSN that they should reprint these journals and sell them because well written, well sourced materials are hard to find in the frum community.

Then I went to a Chabad lag ba’omer event in San Francisco and the achdus was awesome. It was a Chabad event that had a bunch of folks from different organizations that don’t always agree with Chabad and vice-versa, yet everyone was chilling and having a grand old time.

The achdus continues in their private homes. I have personally spoken with many Chabadnicks and misnagdim that don’t have any ill feelings towards each other. Usually you get people alone and their true thoughts come out. Maybe it’s the weather, but I am totally proud of the Bay Area Jews for sticking together and trying to bring more Jews closer to yiddishkeit, or raise the level of Jewish literacy in the Bay Area as the JSN likes to say.

The Bay Area is the third largest Jewish community in the United States and it is also the most assimilated.

← Am I overreacting or does this piss you off as well?
Good shabbos →