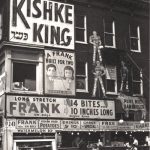 Traditional Jewish food has been given the most unsexy food award at this years Food Network Awards. Judges tried multiple foods from a variety of cultures, ethnicities and religions. “I don’t get it. Why don’t they just make stew, maybe add some color. I don’t want to sound prejudiced, but eating diarrhea is definitely not sexy” one judge said angrily as he pushed away a plate of cholent. Tony Burns of the Food Network told us that he had heard about gefilte fish for years, but when it came out he couldn’t even tell what kind of fish it was. “I had heard that gefilte fish were put in bathtubs on the eve of the Sabbath and that the woman of the house would grind them into its current form, but for the life of me, I couldn’t see any resemblance to fish”.

Not everyone was disappointed. One person exclaimed with joy over the brilliance of the Deli Roll, but agreed that it looked like a sad knish and had no sex appeal. “Don’t get me wrong,” Tony caught up with us as we went around to different booths, “I absolutely loved the gefilte fish, but its level of turn on was similar to that of a cactus”. Others disagreed as they pointed to the strawberry and mango lettuce salad. FS–News reporter Shaindy Sternberg agreed that the salad was sexy but added that a new salad fad started by Suzie Fishbein was hardly a traditional Jewish food.

Other Jewish foods lacking sex appeal according to the judges included kishke, which reminded one judge of his mothers meatloaf after it had sat in a paper bag on bottom of his knapsack for a full day. Potato latkes had the judges wondering why they couldn’t find a sexier name for them and Schmaltz herring caused everyone to agree that it would turn anyone off if they were to smell it – unless they happened to be from 18th century Russia.

31 comments for “Traditional Jewish food given Most Unsexy food award”