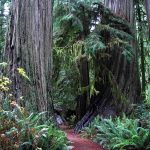 I don’t know about most people, but I love shemona esrei, maybe it’s the shuckling that does it, but I really like talking to God via shemona esrei (definitely my favorite prayer besides asher yatzar), usually in the woods and not with a minyan, but still whenever I am finished with shemona esrei I am always wishing it was a little bit longer (if I slowed down more it would be – but I have the brachas I relate to like modiim and the other one’s like v’lamalshinim that I don’t, maybe because in some circles I would be a heretic) I don’t want it to be like musaf on rosh hoshanah, but a bit longer would be good.

Hence, the reason I kind of like missing ya’ale v’yavo, like yesterday during mincha I missed it. I was in a beautiful redwood forest overlooking the pacific ocean and all of these grassy hills when I decided to stop for mincha, I usually stop when I feel so much gratitude to God for providing the beauty and awesomeness I am experiencing and this forested trail was really doing it to me.

I wasn’t happy at first about missing ya’ale v’yavo, but two things clicked. The thought that I would be able to say one mincha alone and one with a minyan was cool as well as the fact I would definitely be up on my 100 brachos, although I do wonder if missing ya’ale v’yavo means that your shemona esrei wasn’t counted and instead was a bunch of bracha livatala’s which means you screwed eh.

I should mention that if I miss it in early morning half awake shacharis, chances of me repeating shemona esrei are very slim.