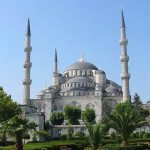 I was passing through downtown Manhattan recently and happened upon a huge rally of self-described patriots protesting a planned Islamic center that would be built two blocks north of the World Trade Center (known to tourists as Ground Zero). I was aware of this protest because many of the alte cockers from my shul e-mailed me about this event. These are the same elders who still fervently believe that President Obama is a foreign born anti-semitic Muslim, and subscribe religiously to the latest emails from JINSA, AFSI. They swear by Rush Limbaugh, Sean Hannity, and Glenn Beck.

This particular rally was organized by Upper West Side resident Pamela Geller, a conservative blogger who argues that she is not anti-Muslim, but only anti-Sharia, and anti-downtown mosque. At a recent community board meeting in downtown Manhattan, she said that she would only welcome a mosque if it conformed to a new scripture.

“We would like an Islamic center dedicated to expunging the Quran of its violent texts,” said Geller. I’m sorry, but that’s like asking a Jewish synagogue to literally rewrite the Torah. One thing that all Jewish denominations agree on is the text of the Torah, even if we disagree on the meaning and translation of the text. Gay congregations lain from the same Vayikra as Orthodox shuls.

Would Geller propose rewriting the Torah, based on its demand that rapists marry their victims? Islam can be reformed without changing its scripture.

That being said, the Muslims who daven at the proposed downtown Islamic center are a diverse lot. They vary f rom West African handbag vendors, to Egyptian halal cart owners, to a few financial workers. They have nothing against Israel per se, but when a Palestinian says to a fellow Muslim “Help me brother, the evil Zionists are hurting me,” the Indonesian, Bengali, or Senegalese will instinctively take the cause of the Palestinian because they share the same faith. Even if that person can’t locate Israel on the map, faith trumps reason. Many Jews unfortunately also suffer from groupthink and fail to think critically when it comes to fellow Jews who apparently can do no wrong. My Senegalese coworkers may distrust Israel, but they respect my faith. One of my Bengali coworkers often spoke about how his kufi cap resembled a large kippa.

That being said, my coworkers know that I am Orthodox and very Zionist. I would rather lose their friendship than lose a single inch of land in the Israeli territories. They respect me for sticking to my cause, but in a nonviolent manner.

If a self-described moderate mosque near World Trade Center is offensive to so many, what about a self-described gentleman’s club that already exists a block away? What about the tacky 9/11 souvenir vendors and conspiracy theorists who crowd the sidewalk around the perpetual construction site?

About Pamela Geller — I am sure her blog is doing a fine job defending Israel, but how come she always appears alone? Why isn’t her husband ever present at her political protests? She has a husband, right? Where are her children? If I wanted to save Israel, I would focus more on raising a strong Jewish family rather than protesting and blogging nonstop.

Why does she pose in a bikini at her age? Like Ann Coulter, she would not need to pose in tight outfits if her blog stood on its own legs, but a little extra attention can’t hurt, I suppose.

← The Lord shall smite you
Project Rant: Transfat Crackers →

57 comments for “On the downtown Manhattan mosque”