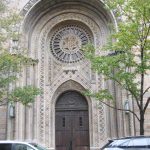 I never thought about my lack of Judaic knowledge until recently. I know I’m an am ha’aretz in terms of scholarship and couldn’t pick up a gemara and just lain from it, but what I’m really talking about is the fact that I know nothing of the Haskala and nothing about conservative Judaism. I know what I learned in yeshiva — that pretty much everyone Modern Orthodox and to the left on the spectrum aren’t real Jews and they have no idea how to learn or poskin on anything. I also remember the frummies making fun of the Modern Orthodox in town kids because their parents drove to shul on Shabbos – but that’s for a different time.

Regardless of what affiliation I stood closest to, I grew up under the umbrella category of orthodoxy. Sure we watched TV on Shabbos and ate dairy out. I attended yeshiva and associated almost exclusively with Orthodox people until after I graduated college and even then, most of the folks I knew that were less observant than orthodox were becoming more religious, or on the right side of those factions. For instance I remember this kid in Albany who wore a yarmulke and tzitzis everywhere, knew how to daven and was learning how to learn, but was a staunch conservative Jew – it made no sense to me. I thought conservative Jews weren’t religious, yet here’s this dude that would be considered orthodox in most frimmy circles, but is affiliated with the conservative movement.

To break it down, frummies look frum. Modern Orthodox (“MO”) women wear pants and the men wear white yarmulkes and conservative folks drive to shul, Beyond that, it’s a different religion. Am I right or wrong?

I am one of those who wants to see what’s out there. I have no interest in advocating the 1950 Conservative Rabbinic Assembly, temporary teshuva that stated one could drive to shul and back. I have no interest in becoming someone other than the person I am, but I have an interest in understanding different sects of Judaism, Sure, it started from wanting to make fun of them. I still do, but what I really want is to understand their philosophy and through understanding maybe we can learn to like each other a little more.

It’s a chillul Hashem, it’s apikorsus, it’s wrong, it’s not FRUM satire, it’s frei, this blog is going downhill, blah blah blah. Sure I heard it all before. I wrote about going to an egalitarian minyan or that renewal thing which I wasn’t down with – but when you break it down, I think it would be properly construed as a mitzvah because nothing in Judaism is set in stone and I can’t see anything greater than trying to make sense of all the stuff that is automatically discarded by orthodox Jews.

With that said, while in LA I stayed with some blogger friends of mine who are conservative. I was bugging the dude trying to get him to admit that he’s orthodox just based on the keeping kosher, Shabbos and wearing a  yarmulke and tzitzis everywhere he goes. He has the look of a modern orthodox Jew, but while he has his run of the mill seforim, he loves to talk about Kaplan, Shechter and Hechsel (the latter we learned last night.) It’s odd, but I found it fascinating. I also found it interesting that he thinks that modern orthodoxy is actually what the Conservative movement was like when it was founded, and that most modern orthodox Jews align more with the conservative movement in terms of their practice rather than the orthodox.

You see, within the non-frum world, affiliation is a big deal. I never even thought of the word until recently. Just like the yeshivish folks call Avi Weiss non-orthodox, this guy also acknowledges that Avi Weiss is trying to call himself orthodox for the shock value when he is really conservative.

I began to think a lot more about conservative Judaism after my hosts took me to a chavrusa learning session at Temple Beth Am, a beautiful conservative shul in the Pico Robertson section of LA. The second I walked in I thought about how frum everyone looked. There were a bunch of Rabbis or rabbinical students in the room and they all looked like they walked out of YU or any other modern orthodox program and one even looked like he had some yeshivish in him. As you know I am all about looks, if they look frum they must be and if their accents sound frum, they must be. Sure they used a tuf rather than a suf, but they didn’t have these classic conservative sing song accents that I love.

There was one girl wearing a yarmulke and there was one guy and another person who we debated over dinner about whether or not she was a he or he was a she. The yarmulke really threw me off. Oh and did I mention everyone wore a normal yarmulke besides for me, knitted towards the front of the head? None of that throw-it-on-back-of-the head BS or satin yarmulkes from Herb’s bar mitzvah in 1953. It all looked so weird to me and shattered my stereotypes of conservative Jews.

Sure I had to ask some questions. Was the kitchen kosher? Yes. Did they use a microphone? Of course – but electricity has never been proved to be fire. Then how come everyone drives to shul? The Rabbis don’t…What do you call the husband of a Rabbi? No one has any idea, because the only female rabbi in the room is married to a rabbi. Why do you feel the need to wear a tallis all of the time? Tallesim are minhag.

Other questions I always wondered about conservative folks.

Why do they have to have everyone wear those fruit white teepee yarmulkes?

Why do the bar mitzvah kids sound like such douches with all that sing song stuff?

Do conservative people have their own shulchan aruch?

Do frummies ever show up at conservative shul other than bar mitzvahs?

Did you know that frummies say you can’t step foot in a conservative shul?

Who writes your Torahs? Orthodox Soferim?

Do you have your own shechita?

What are your thoughts on Glatt?

Are there any conservative people even reading this?

I wonder if I am going to lose readers because I am open minded and want to explore. For the record, I am just as curious about Chassidim and other sects of orthodoxy as I am curious about sects of non-orthodoxy, it’s just not as easy to poke around in those places.

154 comments for “Getting to know conservative Judaism”