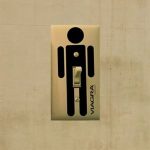 Kansas City – Light switch covers are simply not enough to prevent the bathroom light from being turned off by your child’s non-religious classmates. For years the general stance toward light switches was that tape or snap button covers were enough. Some bold frummies even went as far as to actually say that whoever switches this light switch is chayiv misa and will brought to the bais din shel maala when they expired, but to no avail.

A rash of dark bathrooms in Kansas City has led community leaders to publicly speak about this in their Shabbos drashas. It appears that children who attend religious schools aren’t educated in the dark Shabbos bathroom rule and it has brought a lot of pain to the community.

“Do you know how hard it is to find a neighbor on Friday night to turn out bathroom light back on?” Cheryl Nussbaum of Overland Park told FS News that her children were friends with more “modern” children that obviously used electricity on Shabbos. “These are the types of kids who take off their yarmulkes when they come home from shul and they always turn off our bathroom light when they come our house for a play date” Cheryl told us that nothings works, even telling the children outright fails, because turning off a light switch is something that comes automatic to most people.

Many young children simply thought that the snap button light switch covers were made for child protective issues and not for Shabbos. Rabbis around the community are wondering how they can educate children on this weighty matter but we think it’s more about the dollars. Most of the fundraising materials sent out by local shuls are actually read on Shabbos on the toilet and since people are having trouble doing that these days, they have noticed a significant drop in funds.

Rabbi Sokolov admitted that he really liked reading the Jewish Press on the toilet. “It’s been a debate amongst many of the local rabbinate if reading Jewish newspapers on the toilet is kosher. We agreed that the Jewish Press or lower could be read, as long as you didn’t read the divrei torah or my machebers. Have you seen the chronicles of crisis lately? It should be called the Jewish Prust.” Rabbi Sokolov’s bathroom light has been turned off more frequently due to the large numbers of irreligious guests he has over for Shabbos, but he’s taking it in stride. “Now I think about my Shabbos drash on the toilet, it has really improved my game.”

Many larger Jewish communities don’t have the same issues, places like New York and New Jersey contain such insular frum communities that most orthodox parents would never dream of letting their child play with someone of a different hashkafic level. We spoke with Donny Lipkin of Flatbush who told us that if many people he knew would flip their lids if their black velvet wearing children had somehow befriended a suede yarmulke child. “The only families in my neighborhood that have to deal with such problems are those involved with kiruv and some of those new Russians didn’t grow up with light switches, so it’s not second nature to flip it off.”

We are still waiting to see if they can solve this problem which we are sure affects many small town Jewish communities worldwide.

2 comments for “Having trouble with shabbos guests turning off the bathroom light?”