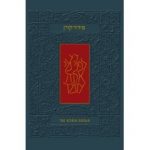 I tried to use the Koren Sacks siddur, but it didn’t work. I didn’t like the modern orthodox font, it had that Israeli and American flag shul type font. Real modern orthodoxy, it was also snooty from the sound of the introduction and the paper was flimsy enough to become brittle after I drooled onto it during a high moment of kavannah. The real reason that I couldn’t bear using the Koren Sacks siddur is because I was weaned on Artscroll and the Koren Sacks siddur has the Hebrew and English on the opposite side of Artscroll. This gave me a major head ache and whenever I began davening I was looking at the English and had to realign my eyes. My favorite siddur is the 1935 edition of the Tikun Mayer with the yellow cover.