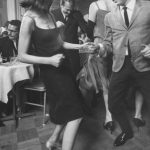 I am so maddened by the shift to the right in orthodoxy. When I was a kid there was none of this crazy separation of the sexes and you didn’t see us having trouble with marriages. Did I ever tell you that I met your father at a dance put on by our local Young Israel? Imagine that — a dance in a shul. You would have the rabbis placing cherem on all those involved if it happened nowadays and you know what, we were fine without all this craziness. We didn’t turn out too bad. So I touched your father before we were married. We dated on and off for years, but we were still religious. So what if we went to dances and necked in his Chevy — is it such a big deal>

Another thing I really don’t like is this kosher business. When we were kids all you had to do was look on the back label at the ingredients. If you didn’t recognize anything, then you could eat it and I just want you to know that the Rav of the kehilla told us we should do this. There was no politics with different kosher authorities, we could tell if something was kosher without getting messy. Now, you have these Rabbis fighting over what’s kosher and what’s treife and it has nothing to do with kosher — it’s all politics.

This kind of talk gets to me, because I really don’t agree with it — you cannot go back to the past. People in general were less religious. Remember that this was the treife medina, this was post Holocaust and this was a time when frum people worked on Shabbos. Being frum wasn’t easy. We take so many things for granted nowadays, like walking around with a yarmulke and not getting beat up by Italian or Irish kids like my father had to worry about growing up in Boro Park. My grandfather never worked on Shabbos and that was a big deal, but many people were forced to — they had mouths to feed.

If you really want to be less religious, be less religious, but to complain about how frum everyone’s gotten is a wrong move. I think it’s amazing how 50 years ago there wasn’t much yiddishkeit in America and look at us today – it’s pretty insane. I mean Lakewood is awe inspiring, go check out Square Town – super cool to see a full blown Chassidishe Shtetl in the middle of New York State. I think that after the war many people gave up. I could never relate to the feelings – but those who held on to faith and rebuilt what they had lost in Europe is pretty amazing – yet people complain about us moving to the right.

Despite what I write here much of the time, and despite the fact that I don’t agree with lots of what the frum community does, it’s my community and I really dislike when people take things to for granted. I also have a deep respect for the Gedolim like Rav Ahron, Rav Yaakov, Rav Ruderman, etc… who transplanted European style yeshivas to America. People who complain about kasharus not being what it used to be should take note. Did you know that getting a reliable shochet 50 years ago was pretty tough? Do you realize that one of the reasons we can’t just check the product label is because food chemistry has made crazy advances in the last 50 years. Enzymes, preservatives, all sorts of additives come from some crazy places – yet people still take the “kosher industry is a sham” route and complain about things. I think you should all sit down with an experienced mashgiach and talk shop – it’s truly unbelievable what goes into some products that sound perfectly kosher. If you don’t feel like keeping kosher, that’s fine, but to tell everyone that it’s BS and a scam, is a bit much. I can’t even pronounce half the ingredients on labels anyway.

The day school movement is huge. Orthodox Jews went to public school because they had to. When my father went to Ner Yisroel in the late 50’s, they went to public school in the daytime and learned afterward – I couldn’t even imagine it nowadays. Many of the yeshivish practices developed to fend off the encroaching secularism and you know what? It kind of worked. I may make fun of the yeshivish community a whole lot – but I have deep hakoras hatov and out of all Jews I like them the best and relate to them the most (weird, unless you actually know me)

I am pretty sure that if you asked folks from back in the day if they would have rather have reliable kasharus, yeshiva education and the ability to raise their kids in a frum household – they would have picked this over working on shabbos, young Israel dances and reading the labels to find out if things were kosher. I know that modern orthodox fantasy literature sounds great – but times were different. As for the mixed dancing, people always mention this but it was a big contention within the Young Israel movement – if you want to learn more about I highly recommend the Irving Bunim biography which may be the best Jewish book I have ever read.

This post was originally going to just be the top three paragraphs, but I just started ranting here and it felt good to get it off my chest.

← Shelach Dvar Torah: All A Matter of Perspective
Due to Artscroll monopoly I can’t stand the Koren Sacks siddur →