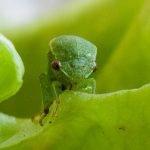 World famous blogger Heshy Fried has admitted that lettuce does in fact have bugs in it. The author of Frum Satire which seeks to discredit orthodox Judaism from a humorous standpoint admitted in an interview that lettuce and other vegetables had bugs in them and that he himself “washed the F” out of these things for fear that he would eat a bug and be over on 6 lavim and be considered an abomination.

He admitted that although bugs in the lettuce is an overused crack at the frum establishment, he readily agrees that eating bugs is one of the biggest problems facing frum communities today. He dismissed the shidduch crisis and the yeshiva tuition crisis as hogwash with solutions that are readily available, but too progressive for today’s mindset. But vegetables, regrettably, have no solution. “The only solution is to wash with veggie soap and rinse, or use a light box” Heshy admitted to using a light box to check collard greens, Swiss chard and basil, but we ourselves had no idea what he was talking about and therein lies the problem.

“Frummies just don’t eat enough produce” Heshy ranted to us. They think that the fried onions and shredded iceberg lettuce at Carlos and Gabby’s is called produce. He told us that he thinks the yeshiva tuition crisis could be solved by produce. “Have you ever seen how cheap it is to buy huge bags of mustard, turnip or collard greens? You could feed a family of ten on greens alone.” It’s true — we went to our local grocery store and a 5 pound bag of mixed greens was less than 3 dollars. Unfortunately, most heimishe grocery stores won’t carry produce that needs extensive washing for fear that some bugs will not be found and that fear is justifiable.

Like most problems, Heshy claims to have a solution. he told us that the prohibition against eating bugs was clearly against whole bugs and hence the reason that ground up strawberries don’t need to be checked. “Imagine if every heimishe yungerman would drink a green cocktail before seder. They would all be healthy individuals and they would save loads of money for things like overpriced cell phones and foreign made minivans.”

We don’t think the frum community is forward thinking enough to notice the value in Heshy’s words, but with a little butter and salt, I had my collard greens tasting mighty fine this morning. Heshy added that this could bring the black and orthodox Jewish communities to a better understanding of each others foods. Although greens are traditionally soaked in bacon or lard, butter or olive oil works fine as well.

19 comments for “Heshy Fried admits that lettuce does have bugs”