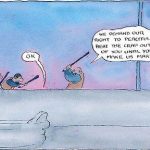 I think that talking about the Floatilla is a waste of time, but you folks keep asking me to write about it again, so I will. I can’t really think of any way to make fun of it other than a Pirates of the Mediterranean spoof – so I figured we might as well talk tachlis and be serious for a moment here.

The Floatilla situation sucks some serious raw deli roll. It blows. It tastes like burnt three day old cholent. When I first heard that a bunch of unemployed lefties were going to try another Exodus I knew we were in for trouble. You see, I knew this would happen and I knew what the reaction would be. If no one would have died the reaction would have been the same. If there were warheads in plain view sitting on top of the ships, the lefties would have been pissed off.

Israel could have let these Turkish ships through but who knows what was on the ships? They should have pulled an Exodus. They could have been like the British and put everyone in Internment Camps and searched the cargo, but that takes time and money and then we would have been branded occupiers.

I know some people are going to bash me for saying this, but it needs to be said. This is a one sided pro-Israel post, mostly because my readers are too sheepish to hear that everything Israel does isn’t necessarily the proper thing. It seems (although both sides seem to be spewing and spinning loads of propaganda) that Israel seriously screwed up, but I’m not saying any of that.

I am merely saying that this happens all the time and it should be expected. The lefties are going to hate on Israel for anything it does, so no trying to please them; the right wingers are going to be pro-Israel no matter what and would never admit to any wrong doing. So why are we wasting our time talking about this Floatilla? I still think about Tortillas when I say it by the way.

Well, because most of us haven’t learned that Israel is screwed no mater what way you put it and the most vocal lefties will hate Israel for all eternity. Of course we can try and sway those in the middle, but most of us have already been swayed by the powerful media that has brainwashed us or our peers.

In my humble opinion, Israel needs to stop worrying about what the world thinks and go about its business. I am pretty sure they are going to take out Iran soon. Everyone will bitch and moan about that too, but just like Osirak, the world will thank us later. Have any of you noticed that Biden came out in support of Israel and Obama hasn’t condemned us?

For some good blogging coverage of the events taking place in Israel check out:

To see what the lefties are saying: