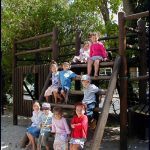 Separation of the sexes isn’t just for weddings and sidewalks anymore. The latest call for separation of the sexes comes from the playground as Ultra Orthodox Jews in Brooklyn, NY have become frightened at the thought that their children are playing with members of the opposite sex. Many studies have shown that children learn from an early age what is right and what is wrong, and parents fear that mixed playgrounds may give children the impression that playing with and talking to the opposite sex is kosher.

In an effort to stem this perversion of their childrens’ minds, a local group of mothers, calling themselves Mothers for Kosher Playgrounds, has demanded that the city post separate hours for girls and boys in their local playgrounds. Since no other groups use the facilities besides these Ultra Orthodox Jews, they don’t see the problem.

The ACLU has already announced that they will file a discrimination lawsuit because, they claim the group is a clear violation of church and state clauses, by using religious practice as a means for making new playground hours.