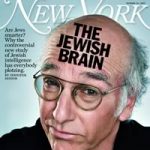 The goyim succumb to taiva and are dangerous. They will befriend you and then turn on you. Non-Jews are evil and are only there to convert you. They will suck you in and then slowly convince you that Jesus is Lord. First you will be chatty in school, and then all of a sudden you are under the chupah and your bride isn’t Jewish.

This and more is what I heard during my yeshiva years. We were told how holy we Jews were and how evil and unworthy the goyim were. We were told that they hated us. Wait, I am still told that by plenty of people. Everyone hates the Jews, according to my old man — especially the liberal Jews. Either way, being friends with non-Jews never really entered my solar system.

Think about it. As an FFB, I went to yeshiva my entire life and the first time I ever had a non-business experience with a non-Jews was when my auto mechanic asked me to mow his lawn for him. Most of the folks I know who grew up orthodox have little to do with non-Jews in a non-professional manner. I didn’t go to school with them until I hit 18 and even when I tried to hang out with them, I could never fully relate. I don’t think it’s wrong to be friends with non-Jews like my Rabbis had tried to convince me, I just didn’t have any interest.

I received an email the other day from the same girl who wrote that Dear Heshy post from a week ago. She was pissed that other frummies were giving her looks for hanging out with non-Jews. I don’t understand why. She lives in NY, hasn’t she ever gotten the Boro Park Stare?

I can fully understand why some folks might feel it wrong to be friends with non-Jews. Some of the core parts of Judaism are designed to keep us with our own kind. Keeping kosher is one of the basic tenets of Judaism and it is responsible for derailing all of my chances at being chummy with coworkers or classmates. Shabbos is another biggie. Not being able to go out on Friday night has made me look like an anti-social religious nut job to plenty of people, but I have never gone “out” on a Friday night, unless you count those evenings spent at Barnes and Nobles looking at bike magazines when I was a teenager.

I don’t look at non-Jews as evil. I guess I just stick with my own (although my own include people who converted to Judaism – reform, conservative and orthodox) out of comfort and Judaism being central to my existence. I look at it like any common group sticking together.