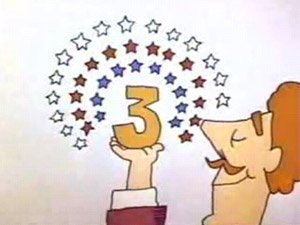 The next in a weekly dvar Torah series by Rabbi Eliyahu Fink, Rabbi at Pacific Jewish Center in Venice Beach California.

This week we read Parshas Beha’aloscha. Aside from being the most difficult parsha to transliterate, a bit of trivia is present. The famous verse “Vayihi b’nsoa ha’aron” is found in the parsha and in the sefer Torah (and most Chumashim) surrounded by an upside down letter nun. One upside down nun is before the verse and one upside down nun is after the verse. This strange phenomena needs some explanation.

Here is what it looks like in a Sefer Torah:

The Talmud in Shabbos (116a) explains that the verse does not belong here. It is out of place. It really belongs when the Israelite camps made their first journey in parshas Bamidbar however it is in our parsha instead. The reason it is found here is to separate between two negative stories.

The rishonim are all bothered by this reasoning. There is nothing negative that directly precedes the upside down nuns! What does the gemara mean?

The negative story that follows the upside down nun is fairly obvious. In fact there are two negative stories taht occur back to back following the upside down nun. First there were the misoninim who were consumed in a heavenly fire and then the next set of complainers were not happy with the steady diet mon, they wanted a variety of food. The Ramban quotes the gemara that says that the negative story that precedes the upside nun is the verse that says “vayisu mehar sinai” (and they left Mt. Sinai). The Ramban explains that by saying they “left” it connotes the feeling a child has when school is over. They slam their books closed pack up their backpacks and run out the door before they can get a new assignment. Similarly, Klal Yisrael did not want any more mitzvos so they “got out of Dodge” as quickly as they could. Clearly, this reflects a very negative attitude among the Jewish people. Therefore, the chumash interrupts the narrative to break up the fleeing of Mt. Sinai and the negative stories of the misoninim and the mon complainers.

But why? Who cares if there are 3 consecutive negative stories?

The Ramban says that we break up the narrative so that there is no chazaka or status quo of negativity. In Torah law there is a concept of muchzakos. Applied here, when one acts a certain way 3 consecutive times, that type of behavior becomes the default. We don’t want the default to be negative behavior. Therefore the Torah interrupts the negative behavior with vayihi b’nsoah.

I think that this is important. Behaviors can become second nature. My great great grandfather, Reb Elya Lopian taught that sometimes second nature is harder to change than our real nature. Once we “learn” a behavior it becomes so natural that it is more difficult to break away from that behavior than it is to change our natural behavior. Habit can be a toxic thing. The Torah reminds us here that negative behavior is bound to occur. We just cannot make a habit out of negative behavior.

There is also a great comfort in knowing that just as our negative behavior can become second nature, our positive behavior can as well. When we string together 3 consecutive acts of good behavior, those good behaviors can also become habits. Those are really good habits. It can be hard to try to adopt a new behavior or characteristic into our lives, but if we can pull it off just 3 times in a row, we can make it a habit and it will become second nature to be great.

7 comments for “Beha’aloscha Dvar Torah: Three Is A Magic Number”