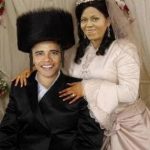 Whenever people begin to talk about hair covering post marriage, the conversation always ends up in chassidish territory and someone is always wondering why they shave their heads if they are covering them anyway. Interesting enough, no one ever wonders why they have to cover their hair if they don’t have any. I have come up with several reasons based on some pretty deep and abstract sources I have come across as to why Chassidish women shave their heads.

It is common knowledge that Chassidish women are into power walking, since they typically live in windy neighborhoods, the rabbonom felt that the risk of their turban or pillbox flying off was great and they deemed it necessary to shave their heads just in case someone should see it when their head covering fell off.

Chassidish men are so used to pony tails that the common instance of ladies peyos poking out from under their snoods and hats may cause them to waste seed from such ervah, as small as it may be.

One of the great Chassidic masters of blessed memory hid under his Rebbe’s bed to see what his wife wore so he could tell his wife to wear the same thing. He was rather shocked when he saw his Rebbe’s wife had shaved her head and he gasped. His Rebbe demanded an explanation and he told him. Then they launched into a Talmudic discussion on the subject as they walked to the Rebbes wagon parked in a Russian forest.

Lice was common in the shtetl and so rather than suffer through the lice outbreaks like their brethren in the mussar movement, the Chassidim felt that they could better serve God by shaving their heads. Men and women both shaved their heads in order to serve God and not focus on the physical.

During the heyday of Chassidism many of the ladies would sell their fine Jewish hair for a profit after they wed. Many of them figured that if they would have to cover it anyway, they might as well sell it at a tidy profit and send all of their prodigious sons who knew all of shas by the age 12 to yeshiva. (I thought of the sheitl farm idea but had never had known that someone thought of it before me)

Did you know that the only organized inter-chassidish sport is synchronized swimming? Unbeknownst to many bend down hat wearers, Chassidish women tend to keep their great shape by swimming and the lack of hair under their shower caps makes for some smooth moves in the water. Karlin-Stolin women are known for their underwater screaming.

← Letter to the editor: It’s wrong to advertise for the gay shidduch site
With new technology comes new halachic questions →

72 comments for “Why do Chassidic women shave their heads?”