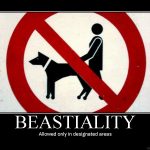 I was so mad that you posted a free advertisement for a website that clearly violates the Torah by hooking people up with shidduchim who shouldn’t be hooked up. Would you advertise for an intermarriage site as well? I find it so troubling because we all know that shidduch sites like Frumster and Saw You at Sinai are just excuses for frum Jews to have sex with each other and gay sex is clearly going to come from these shidduchim.

We never thought it would happen but slowly our own frum society is spiraling downward into a mess of immorality. We have seen frumkeit soar in the past 50 years only to hit this trend of immorality. Child molestation, mixed seating, non-glatt meat and sexy sheitles are just a few of the crimes committed openly and willingly against our Torah on a daily basis. I am sad to report to you that we have just heard of such a reprehensible thing that we have had to ask numerous poskim whether or not they felt it appropriate to publicize. The following statement should not be taken lightly. This is worse than Tropper, Lanner and Kolko put together and topped with illegally harvested kidneys and eating kitnyos and gebrokts together on Pesach.

It was thought by Rabbonim worldwide that two websites promoting extramarital affairs and gay shidduchim were as far down as one could go but we were wrong. It was thought by some rabbonim that both the extramarital affair site and the gay shidduchim site were jokes, possible black mail operations or just out to offer an easier solution than suicide. Several poskim have told me that if they could obtain a list of the members they may be able to convene a bais din and a pay per view contract for the public killings.

Frum Furry Bia and Idolatry may be the worst possible combination of aveiros that a Jew could commit. For those of you who do not understand, my Rav has given me permission to explain. The site is dedicated to people who have Bia with animals while worshiping idols. Idolatry and Bestiality are both grave sins. They are sins that according to the torah, one must give his life rather than commit. Yet in this instance we have seen frum society spiral so far down that we have sunk lower than the goyim. We could not find a goyishe group dedicated to the same acts at the same time.

According to the mission statement, all animals involved in sexual acts will be non-kosher so as not to violate the issur of tzar belly chaim. Is that why they call themselves frum? This is a real shonda and an embarrassment. We must pool our resources together so that we can find those responsible for these and other reprehensible acts that were no doubt committed in order to create the photos section of the site. One such picture shows a chassid behind a crucified horse, while others watched and bowed down to the spectacle.

This will not stand. We will not watch frum society degenerate into what secular Jewish and goyishe society have become today. If we do not stop such things from happening, before you know it, we will have members of the frum community who openly have relations with kosher and non-kosher animals, same sex human beings, fruits, fish, apple pies and children.

← Chabad on Campus I love you
Why do Chassidic women shave their heads? →

54 comments for “Letter to the editor: It’s wrong to advertise for the gay shidduch site”