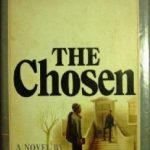 Part of my friend’s conversion process requires that a Rabbi from the beis din he is working with to come over and meet with the family and take a look at their house. So he put away all of the sex toys, non-kosher animal blankets and old pictures of their family swimming in mixed beaches to get ready for the rabbi’s visit and still the rabbi found two things that weren’t up to par.

He noticed that My Name Is Asher Lev was on the bookshelf and said that it was not so kosher. That kind of got me thinking about what else may not be kosher reading, I can imagine that beis dins would really be against potential converts reading anything written by Heshy Fried, Shalom Auslander, Shmarya Rosenberg, Nathan Englander, Binyamin Cohen, Samuel Plotz, Chaim Potok, Leon Uris and a slew of other Jewish authors that may sway the opinions of potential converts and give them too much of an insider’s look at things.

The rabbi then interviewed my friend and his family and one of the questions that came up was whether or not they make cholent on shabbos. They said no and the rabbi then launched into a diatribe about how cholent was part of the tradition and they should really make an effort to make cholent on shabbos. I thought he was joking but he wasn’t. He was quite serious. He launched into another diatribe about how cholent was allowed even though it was cooking on shabbos and how that would be good practice for dealing with those issues.

Since I am not converting I don’t have to deal with this. I do know there are a lot of converts that read this blog and was wondering if you have similar stories to the one listed above.

93 comments for “Conversion Chronicles: Chaim Potok books are not kosher”