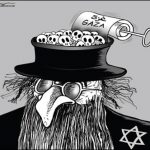 If you are like me, you have been reading about the Rubashkin saga for months. What began with a Federal raid at a meat processing plant to ferret out hundreds of illegal alien employees is now culminating with a federal and state trial. (Link)

If you are like me, you have been hearing that the raid was “disproportionate” and fueled by anti-semitism.

If you are like me, you have been hearing that his federal sentencing recommendation was anti-semitic. (Link)

If you are like me, you have been hearing how the county jail was anti-semitic in not providing food that was kosher “to Rubashkin’s standards” and not permitting him to wear religious garb (tzitzis / tzitzit). (Link)

I have three things I want to say.

2) Rubashkin is the cause of much of the animosity towards him from the prosecution and judiciary. It is NOT, I repeat, NOT because he is Jewish, nor is it anti-semitic.

3) Even those who cry anti-semitism in this case are misusing the term in a gross way.

I think #1 is a well represented opinion throughout the Jewish community. It does not require any more attention from me. Consider me to have said “ditto”.

Number 2 is something that has been so wildly misunderstood it almost seems blatant. The reason Rubashkin’s plant was raided was NOT due to a plan hatched in the bowels of a Ku Klux Klan facility. The reason his plant was raided was because he snubbed the Unions by hiring illegals and the Unions were none-too-happy. They made the infractions known to the Feds and they raided the plant. Were there too many helicopters and fancy weapons? Probably. Was it anti-semitic? Probably not. The people who make these kinds of choices don’t, actually, CAN’T have vendettas against minorities. This is the Federal Government of the most benevolent host the Jewish people have ever had. Use your noodle people! There is no conspiracy!

The sentencing recommendation was well within Federal guidelines. I was talking about the case to a lawyer friend of mine who works for the Court of Appeals and who knew nothing about the case. I told him some of the facts about the bank fraud. His immediate reaction was, “that’s a life sentence”. He didn’t know the crook was a Jew. He didn’t know the crook was accused of other crimes. He only knew about the bank fraud and he said “that’s a life sentence”. Is he anti-semitic? Of course not.

Also, much has been made of “comparable criminals”. It is an unfair comparison because Rubashkin has not been cooperative. He was not willing to accept any plea deals. He maintains his complete, 100% innocence and is a difficult person for the court to deal with. He has many special requests and claims he is being victimized. He has offered only one half-baked apology since this saga began and has not taken any responsibility.

While is jail, Rubashkin has made special requests. Some have been honored and some have not. Some of the requests that have been honored and he has stated that he not satisfied with the kashrus of the food. It is kosher, just not kosher enough. Is it anti-semitic if they give him kosher food that most orthodox Jews would eat?

Also, Rubashkin will not walk without wearing Tzitzis. He states that his religion will not allow him to walk. So he has been carried around so that he will not violate this religious law. The problem is that he is with ignorant of the law or is just trying to be annoying. The law is that when one wears a four-cornered garment (think of a poncho or rectangular wrap) the garment must have a certain formula of strings attached to the garment at the corners. One is not required to wear such a garment. However it has become customary to wear one of these garments with the strings attached for prayer as well as during the day. But if you are not wearing a four-cornered garment the law does not require that you wear the strings (like a button-down shirt or blazer don’t need the strings). So why is Rubashkin making a stink out of an issue that is not religious? Is it anti-semitic if the jail does not cooperate with this?

I think it is clear enough that for every “anti-semitic” act against Rubashkin, there is a plausible non-anti-semitic explanation as well. Let’s just stop with the anti-semitism cries.

As for #3, I dare you to look a Holocaust survivor in the eye and call this anti-semitism. Try telling a Jew who was thrown out of Spain and Portugal for not bowing to the Cross. Or how about Jews who were slaughtered during pogroms. Being prosecuted for actual crimes is not anti-semitism. Anti-semitism is hatred and cruelty to Jews for no reason other than the fact that they are Jewish. That is not the case here.

I have more to say about anti-semitism in general. Stay tuned…

← Do you want to offset your carbon footprint?
Dear Heshy: what do you think about non-kosher gum, shomer negiah and body piercings? →

92 comments for “Is the Rubashkin Trial anti-Semitic?”