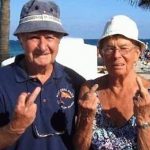 “My mother made me go to the mikvah before my wedding, so I show up at this old dingy hole in the ground in the basement of our synagogue that reminded me of the pool at the Y and I meet this old lady caretaker who tells me that I didn’t go in enough and am not kosher. She keeps saying that I need to dunk all the way under the water – and I’m thinking that there’s no way in hell I am getting my hair wet on the day of my wedding.”

So went one of the stories about their brushes with orthodoxy from the table of little old ladies who I was having lunch with in a random retirement community in South Florida. Everyone had their own story, and this was the first time I had met so many older folks that had not grown up orthodox. I think that when you grow up orthodox, you are convinced that everyone born before 1940 had to have been raised the same way but that just isn’t the case. I used to think that everyone over age 70 knew way more about orthodoxy than people from younger generations, but I was proven wrong.

One woman piped in about how she agreed to make kosher chicken wings once and she swore never to cook or eat kosher chicken again because of all the plucking. I have never noticed the feathers in kosher chicken (probably because I never actually made any), but these ladies made a big deal of it, and don’t even get me started about their salt woes.

I am not a fan of Florida, but could see how some people could like it. Take a drive around South Florida and everything looks exactly the same. Sure there are palm trees standing tall against the sunny sky and it’s 70 degrees in the winter – but other than that, Florida doesn’t have much to offer. That is, until I discovered how much fun old women are.

I met my girlfriend in Florida so I could be introduced to her grandmother who lives in one of these places that make you very disoriented if you don’t know the address of the building where you are staying. Every house looks exactly the same and the streets all wind into one another. There are golf courses everywhere with white pants wearing folks taking swings and the only cool thing about the whole complex was the rather large rosemary plant that was sitting in front of the house.

Grandma is an 85 year old woman that plays bridge, goes out to movies, volunteers at the soup kitchen, and invites people over for meals. She leads a pretty active life and acts very young for her age – though maybe 85 is the new 75. She also felt the need to compliment and question my religiosity and tell me that I was one of the only religious people with whom she has ever had a chance to converse.

Shabbos at Grandma’s was an interesting experience. After she got home on Friday from her weekly movie night, Grandma asked me about Temple. Did the men wear jackets? No. Did the women all wear hats? No. Did the Rabbi speak? No he wasn’t there. Did they have an Oneg Shabbat? No, why would they do such a thing? The questions went on and on. She was genuinely curious, but I still couldn’t believe she didn’t know anything about orthodoxy. Apparently the conservative and reform shuls that she attended always had an Oneg Shabbat after shul. I wondered about this. She told me that everyone eats before shul which is something I never heard of before.

Grandma was very gracious, and although she was curious about my religious practice, she wasn’t disparaging. That is, other than when we got into a discussion about how orthodox Jews are of a politically conservative bent – this she couldn’t get over. She went on and on about how we have minority status and that the left wing presidents were best for Israel and so on. I told her that it depended what you thought was good for Israel. I always had figured that old folks would generally be conservative (not just politically) but she was very liberal and not old fashioned at all.

Grandma scheduled a lunch visit with a bunch of her friends on Sunday and that was loads of fun. This was the first time I got to hang around fully functioning older folks. Most 90 year olds I meet are dying or should already be dead, but these women appeared to have years of life left. They drive themselves and live alone, though few do still live with their men – did I mention that almost all the men are dead? I did meet one guy who looked like he was 50. It turns out he was 87 and in really good shape.

I am fascinated with older folks because I think they are super cool. They have this wealth of knowledge and experience into which I always try to tap. It doesn’t hurt that I love history and hearing how things used to be. It also doesn’t hurt that every older person I met seemed to have the thickest almost caricatured Jewish New York accent possible.

← Do yeshiva guys touch girls on shidduch dates?
Am I the only one to find sheitles sexy? →