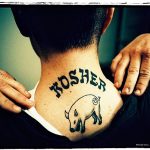 I received this a while ago and just recently found it in my inbox. I remember thinking the first time I read it that it was one of the most interesting pieces I have ever received. I hope you like it too.

If this were an AA meeting, I would stand up before you, raise my right hand to God, and say, “Hello, my name is Nataly Mor, and I am off the derech”.

Living in Brooklyn, especially in Boro Park, and being off the derech is like wearing the invisible scarlet letters “OTD” on your chest. Everybody knows you are otd, but nobody really wants to talk about it. It’s a very uncomfortable subject for people. We are out there, walking amongst you, and each of us has a unique story to tell. Going off the derech is often a life choice we make when we are too young to understand what life choices really mean. I made the choice when I was too young, but I had a very good reason.

You see, I grew up in a converted 3-story boarding house called The Boro Park “Meshulach” House. For those of you who don’t know what a meshulach is, they are those guys who look like Rabbis, and who knock on your door asking for tzedakah for their mothers-uncles-fathers-kallah’s-sick niece. A lot of them are genuinely very poor, but naturally there are some crooks in the bunch.

My house was the place where they would congregate at night to sleep, drink, smoke cigars, gamble, count the day’s earnings, and trade tips and tricks. Before you start thinking that someone should have called child services on my parents, let me explain their situation. My parents were very religious, but dirt-poor illegal Israeli immigrants who did not speak a word of English. They were given a free room and board, and in return they kept order amongst the tenants.  When I mean free room I mean it. My mother, my sister & I shared one room, my father slept in the kitchen. Every one in house shared one bathroom.  It was a very unstable environment in which to grow.

The Meshulachim seemed to have one favorite pastime of all. They loved to teach my sister and I all about “the business”. We were taught the hustle early on. We learned about the big fish, and the way to their hearts. We learned that you always had to have a good story, or else no one will care. We also learned that the driver always gets a cut. Don’t think it was all fun and games; There was the meth head that started a fire in his room, and barricaded himself in it. The goon, who felt entitled to steal our Chanukah menorah, but helped us with troubled tenants so we had to look the other way.  Oh, and the nice FBI agents who came knocking on our door, since apparently we were harboring a top ten most wanted fugitive.

While my happy classmates were learning their ABC’s, I was learning my COP’s. No one could possibly understand my home life, and I never tried to explain it. To my classmates, I was just a freak, a weird kid. So what does a 12 year old do in my situation? I flipped out. I was angry, with the world and with God. In school we were taught that religious men with long beards are saintly, but I knew better. The world in my eyes was a lie. Nothing made sense. I started rebelling. I started eyeing every Rabbi with suspicion. I ate Mcdonalds, shoplifted, wore pants under my skirt, and dark nail polish on my fingers. I also stole pencil cases from my classmates. Well, that was probably because my parents were too poor to afford one. I stayed out all night, because I hated going home. I also fell in with a bad crowd. I felt as if “normal people” could not understand me. I was a very confused kid, and I took it out on the one who I was angry at most; God.

Looking back, I realize that I was not alone. Many kids who go off the derech are just angry at life. They feel powerless with their situation, and take it out on God.  It’s easy to blame God, but not so easy to blame feelings and emotions that you cannot understand. Once you feel like your eyes are open to the world, the natural thing to do is to reject the values you were brought up with. For religious kids, the values they are brought up with are based in God. I always say that going off the derech is not the problem, but the symptom. It is a cry for help. One that is not easily identifiable.

It took me a long time to realize that God was not directly responsible for my situation. In fact, if I had the insight I have today I would have realized that my experience made me a stronger person. I was a shnookie little 12-year-old back then, what did I know?

The problem is that once you go off the derech, it is very hard to return to it. I have tried numerous times and failed. Although I have not found “THE” derech, I have finally started accepting myself, and finding my own derech. After a lot of soul searching I have found my peace with God, and I am in a good place. I look back at my childhood and I can laugh. I have many good stories that can entertain anyone for hours. I also know a house in Queens where they dole out $1,000 to anyone who knocks on the door with a good story… but my driver wants a good cut 😉

***I just want to make it clear that most meshulachim are honest, good people. It just so happens that I ran into a couple of bad apples in my day!

107 comments for “Why I went Off the Derech”