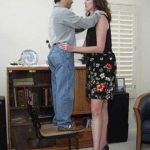 I got a phone call today from a random 718 number, being that I rarely get any phone calls anymore since I moved west I picked it up and on the other end of the line I heard what I could imagine was one of those mixes between yeshivish and Chassidish guys from Boro Park telling me that my father had given him my number and that I was single and looking for a shidduch.

Right away the guy asked me if I went to the Rochester yeshiva and that my name came up because his son went there and that I may be a good match for this girl he knew. He asked me if I had a college degree and what it was in, he asked me what I did for a living and I could see him making mental notes and wondering if I would be able to afford yeshiva tuition. Then he asked me how tall I was, and that’s when I asked him if this was some kind of joke.

I assumed that one of my friends or fans had gotten my cell phone number somehow (it’s not published anywhere) and called me up to play a prank. He then told me that the girl was 5”9 and that was one of the reasons my name came up. I have heard of the height matches in the shidduch world, but have never really experienced them.

I then told him I would call him back, it wasn’t a prank, he actually did get the number from my father. But his concentration on things that weren’t important didn’t convince me that he was worth wasting my minutes on. I told him that I didn’t plan on coming to New York anytime soon and that I was in, it probably wouldn’t be to date some girl from Boro Park. I think he assumed I was a yeshiva guy who went to college – I guess my father failed to mention any other pertinent facts.

← Is communal pressure to marry too high?
Why do Frummies drive like idiots? →