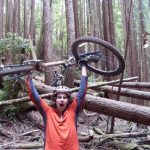 Everyone I have been speaking to on the phone lately has been asking me when I plan to move back to New York and just recently I tell them that as of now I could never imagine moving back east and that’s a pretty scary thought. I originally came out to California on a temporary basis. I was planning on returning in June, getting a normal job and getting married to my girlfriend at the time, and then two things happened. I fell in love with California and my girlfriend decided we shouldn’t get married – both things were heaven sent and I thank God every day for them.

Since my first road trip west, I have dreamt of living in the west. The expansive wilderness areas, amazing skiing and wide open spaces have always commanded a large space in my head. For one reason or another, that dream evaded me, for sometime I even gave up on it and wondered if I would turn out exactly like I told myself I wouldn’t – living in New York and working in a cubicle. I held a smattering of jobs, mostly one’s I didn’t enjoy – just to save up money to travel west and be with the land I loved so much, until that fateful day this past December when I decided to throw my three bikes in the back of my car and drive out to California.

I have been out west for nearly 5 months and it is one of the best decisions I have ever made, but it’s a scary one. Like I always do, I up and left, I am pretty sure some of my less spoken to friends have no idea that I don’t live on the east coast anymore. 8 months living in New York City was enough to tell me that I couldn’t handle that lifestyle, but I miss my friends. I fear that my friends and I will grow apart and things just won’t be the same – but, isn’t that how life works, things always change and evolve. I am making new friends out here and starting another portion of my life.

My commitment to the west was solidified by the fact that my mind has become worry free. With the help of some amazing scenery, some mind exercises and torah, I have developed this amazing feeling of freedom and love that I haven’t really experienced before. The last time I worked on myself like this, was about 8 years ago when I gave up anger. Years ago, I decided that being angry and regretting things just weren’t worth it – learning about the midah of ka’as (anger) wasn’t a good one and that started me on my road to anger freedom. I was never an angry dude, but like almost everyone I know I had anger episodes, road rage, regretting stupid things and allowing sadness to hole up inside me were all swept away. I am on a similar path of enlightenment – but this time it has to do with freeing the mind of worry and trying to appreciate all of the gifts that God has bestowed upon me by becoming aware of every little thing constantly.

My girlfriend of yore – I hate calling her my ex, because we are still best of friends, dragged me to Shamballa Meditation in the city one week, where we sat on the floor and watched yuppies meditating and feeling the love, all I felt was uncomfortable and I wondered if they would have any kosher food after the session. However, I did learn something very important that night, I learned about the Tyranny of the Mind. The Tyranny of the Mind is a Jewish concept as well, there is a lot of stuff written about the yetzer harah and his ability to cause ourselves trouble by allowing us to fret and worry, thereby breaking our patterns of mitzvah doing.

I was driving down the coast one afternoon, the sky was blue and there was saltiness to the air. I had just finished a beautiful ride at Wilder Ranch State Park in which I had ridden through meadows overlooking the ocean and redwood and eucalyptus forests. While driving the sudden thought hit me that I was alive, but not only was I alive and healthy, I was driving in a car, I could see all of these beautiful sights and I was living in a place that I truly loved – I pulled over and davened mincha right there, but more importantly, I had come to realization that I just wasn’t that aware of all of the things I should be constantly appreciative of. Focusing on the good has always been a quality of mine (I hope the readers understand that there is a huge gap to my blog me and this me) and I decided that would start to take over my life.

Soon after this life altering realization, I started seeing things in a whole new light. I started trying to appreciate my vision, by looking around more carefully and trying to take in every detail and understand the miracle of my healthy eyes. This tumbled over into all aspects of my life, right down to taking a nice long piss on a tree in the woods – good thing asher yatzar is one of my favorite brachos to say.

For sometime I wanted to talk about these self realizations, but it’s not easy for me to write personal stuff for such a large audience anymore. When I started realizing that tens of thousands of folks were going to read what I wrote, I started writing much less personal stuff and way more randomness. I know that some folks miss the personal goods and hopefully I will bring you more adventure posts and philosophy one of these days.

Anyway, I’m in the west, I’m loving life, making new friends and trying to figure out what I’m supposed to be doing here. My theory is that after the summer I’ll go corporate, I have been asked if I am looking for a job, I have asked if I have to cut my hair – the unequivocal answer is NO, this is California, people like it wild and no one ever wears suits to work – in fact I didn’t bring a suit out here, all I have is a brown sports coat with patches.

Summer is on its way and already I’m planning how to spend it when I’m not working (what you think I make a living off the blog alone?) and here are some of my ideas. I am planning on a Yosemite backpacking trip in the next few weeks, the main road is cleared of snow and open to bikes before cars so I want to hit that up too. I want to go hiking up in the Humboldt-Eureka area and do some more wandering around the northern California coast. I rode my bike around Annandale State Park in Santa Rosa last Friday afternoon and I got bitten by the bug, you ride through these grassy wildflower filled meadows and look at spruce covered ridges in the distance, I want more of Sonoma County real badly. I went skiing at Tahoe last weekend and need more Sierras, I was told to go to Desolation valley.

So far I have done some very detailed exploration of my area, I have in effect more knowledge of the outdoors recreation than many locals. I have mountain biked all around the bay area and Santa Cruz mountains. I have tried to get to every state park and open space area within a 100 mile radius, as well as trying to learn every back road by car and bike. It’s amazing how close everything is. You can live in the bay area and never drive more than 30 miles and be totally in the woods. Before moving here, I didn’t know it was possible to have a fully functioning frum community so close to wilderness adventure. I just need some close enough friends to drop me off at the sea to skyline trailhead in Big Basin Redwoods Park so I can hike the 38 mile trail one of these weeks. Anyone want to do it with me?

I miss my father, I miss my friends, I miss upstate New York dearly with its old romantic villages and oak and maple forests. I miss driving in New York; I miss the snow, the complaining, the food and the rude and up front people. Life is a wonder to me, I love it dearly and thank God constantly for it, but I wonder what I am supposed to be doing, what is my path? Why am I here? Am I here to blog and share my views with the world? I always wonder if it’s doing good things or bad things. I only see the good in the random letters I get from people who felt that I helped them in some sort of struggle? Does wandering around the wilderness alone do anything for the world besides bring me closer to God? Is that good enough?

On that note, it would be nice to find someone who had free time and wanted to do some backpacking trips.

34 comments for “4 months in California and loving it”