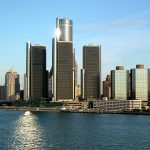 The pizza store in Detroit is like no other I’ve been to, they have the greatest cheese sticks in the world. Soft homemade bread, topped with garlic and filled with cheese. I used to drive out of my way when traveling west just to stop there and fill my tummy with their cheesy goodness. It didn’t hurt that I had a boatload of friends and family in Detroit that I could visit while I had my fill of cheese sticks and nacho pizza. In fact Jerusalem Pizza in Detroit has one of the strangest pizza menus I have ever seen. They have cholent pizza and strange fruit pizzas, as well as fish pizzas and loads of flavors that look completely unappealing to me but have found some strange fans.

After they moved from Southfield to Oak Park, they happened to move right next door to the Record Exchange. The Record Exchange holds a dear place in my heart, for I used to be taken their one of my main music indoctrinators to shop for tapes and CD’s in their 3 for a dollar section. I would load up on 80’s metal and obscure rap tapes, while everyone was well into the compact disc lifestyle.

For some reason my yeshiva had a lot of kids from Detroit, it may have something to do with the fact that Detroit kids were kind of rebellious, or the fact that the only schools they had were a modern orthodox coed high school and a very right wing yeshivish place. There was no place in the middle, for those kids that kept shabbos, but hung out by 7-11 drinking 40’s and they wondered if they could make it to classic rock shows at Pine Nob.

Due to the simple fact that everyone I knew from yeshiva was either from New York or Detroit, the only place I ever went to visit friends from yeshiva during the off season was Detroit. Being that my mom was from Detroit, I had relatives I could visit whenever I went to see my friends. Relatives tend to take you out to dinner and since the restaurants were all good back in the day – it was a good deal. Sarah’s Deli, La Differenace and the two pizza places.

So I used to fly into Detroit and every time I came, I said I wasn’t going to come back. You see my Detroit friends and I were a bit different in many ways, they were into smoking, drinking, partying and staying up all night, while all I really wanted to do was rollerblade around the cool areas like Birmingham and Royal Oak – look for skate parks, eat pizza and find girls to hook up with.

I would sleep in my buddies basement where it was pitch black and while in Detroit I would lose track of time, time went from really exciting to really boring and there were so many times when I was going out of my mind – this changed when I finally got a car and could come and go as a pleased but, Oak Park, Michigan isn’t the best place to be if you don’t have a car.

I do owe some things to friends in Detroit. I was introduced to Dream Theater while driving to a Queensryche Concert that we never made it to. I was sitting in the back seat of my buddies brothers car and this really funky heavy metal was blaring, the guys voice was very high and the music was like modern day Rush. Being introduced to Dream Theater really triggered something in me and I became this music discoverer since then, from Dream Theater I went onto progressive rock which naturally took me to jam band type music which took me to funk and eventually to the holy grail of jazz – all this from that failed concert car ride in Detroit. I got to Queensryche several years later in New Jersey with Dream Theater of all bands and what’s most amazing about it is that 4 seats away a good buddy from Detroit was sitting and noticed me. I should mention that Dream Theater is very popular amongst musicians and yeshiva guys.

For some reason the 7-11 at the corner of Lincoln and Greenfield is the hub of the underage Jewish community. I remember one night we were all hanging out there on our skates and this cop came and asked us how old we were, I said the truth and was told to go home because of curfew – I went home and came back. I also remember that all the guys I hung out with were buddies with the Indian dudes that owned the place and that Mickey’s seemed to be the drink of choice.

One of the things I remember most about Detroit was the weed, I find it kind of interesting that I never even smoked weed until my late 20’s and so do my friends from Detroit who, by the time I took my first bong hit many of my friends had long since given up the herbal pastime and wondered why I waited so long. In fact I can remember almost every time I was sitting around my friends smoking weed and them all saying that they would want to see me high since I was and still am a pretty wild guy.

I remember this one time I was hanging at my buddies’ house and I hear noise coming from the closet. I look inside this walk-in closet and see this little 15 year old kid sitting on a stool with a brick of weed and a triple beam scale, it was pretty funny – I am still friendly with that kid and actually called him to see if I could write about that scenario.

To put things in perspective, not only did I not smoke weed, I didn’t smoke cigarettes (never have) and didn’t smoke hookah. I didn’t drink, but I never felt uncomfortable – I really couldn’t relate to the whole peer pressure thing. I can remember dozens of times when I was sitting in some other place with a bunch of people smoking or drinking and wondering if I was straight edge or offended by them smoking. In Israel I think my Ohr Someyach friends were pretty shocked that I wasn’t swayed by the fact that “everyone” was doing it.

Of course, I am not all that clean I had this quasi fear of smoking, probably to do with my mom being a smoker and dying of cancer – but thanks to Detroit I got high on a shabbos cookie, really high. We went to my buddies house for shabbos and had this cookie made, it smelled terrible because the weed had to fried in oil or butter to release the THC. My buddies dad who is a rather large chassidish looking guy wearing a shirt that says “I’m fat Fuck Off” is telling my friends how to make the cookie on erev shabbos.

I remember it well, I sit down at this huge meal and I am eating the best Turkey and Stuffing and suddenly my face falls forward. I then tried to force food into my mouth but, my jaw wouldn’t work. I hear in the distance an echo like voice seeing Ohmygod Heshy’s stoned and something to the tune I wish it wasn’t shabbos we should get some pictures of this. The little kids were wondering what was going on and someone said something like my stomach was hurting.

I remember sitting on a couch, getting all cotton mouth and wondering why everything seemed to be a dream. Until that moment, I had always thought stoners were all faking it, you know some peer pressure to feel and seem high, while no one really was. I remember my friends little sister poking me with some stick and I was scared it was snake – I haven’t eaten any special cookies or foods since then, but it was interesting.

One time while in Detroit, my friends took me to this store called the Suit Warehouse on 12 mile and Coolidge. They were having a sale of buy one suit get one free and my buddy always the clothing guy wanted a suit. I figured $75 for a suit wasn’t bad and even though I was never one for suits I ended up buying three suits – one of which I still wear. I bought a 4 button white silk suit, which I later sold in yeshiva. I still have two of these suits and both of them are good suits. As with any compliment about my clothing – I go into the story of how I bought these suits and at what price I got them at – I think it’s a Jewish thing to brag about clothing deals.

Detroit seemed to be one of those places that never had any girls around. Sure there were girls, but they either seemed to be hooking up with other girls or have a boyfriend. There were also never any parties, I had this illusion that all suburban people did was throw big parties in houses where the parents were out of town and that I would wake up with my arms wrapped around some girl I don’t remember talking to the night before and that I would have to wade through a sea of bodies and red plastic cups to get to the bathroom where I would find a girl asleep in the bathtub. The closest I ever got to this was when my friends parents went out of town and my buddy cried on my shoulder while we sat on his lawn amidst the drunken madness.

There was also this other dude who made it big in the real estate market and decided to buy himself a house at a tender young age and everyone used to go there to hang out and watch TV on the big screen, but still never any girls.

I remember constantly being deprived of sleep and during one of those sleep deprived nights we were watching Pulp Fiction at someone’s house whose parents were out of town. I remember thinking that it was the dumbest movie I had ever seen, for when I watched it years later I was thinking how I could have thought such blasphemy about one of the most interesting movies I had ever seen.

I find it interesting when in later years after I graduated from high school and college I meet people from Detroit that know me and claim they hung out with me but, I have no idea who they are. I also have a bunch of friends from Detroit that knew all of my friends, but whom I met in different contexts.

I also find it interesting that I have so many friends and memories of Detroit yet, I think Detroit is one of the worst places to live in the country. I have a general dislike of the Midwest due to its flatness and trashiness. It’s dangerous, the weather kind of blows and you cannot live in the city without a car, wait, you can’t even go to the city without body armor – unless you happen to be Joe and those who know Joe (I can’t say his racially charged first name) know exactly who I am talking about.

Detroit is good because it’s dirt cheap to live there, you can buy a house in the frum neighborhood for like 50 grand or less and the people in Detroit is super friendly and welcoming.