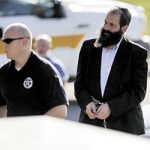 I received a phone call last night from a good friend of mine asking me what I thought of the current effort to influence the proceedings of the Rubashkin trial. I had no answer for him and that bothered me. To tell the truth, I haven’t been paying much attention to the Rubashkin. As someone in the Jewish media, I probably should be.

I get at least one text a day from this guy telling me to learn for the zechus of Shalom Modechai Ben Rivka Rubashkin and I have been bombarded with mail, facebook messages and wall posts asking me to help out with trying to convince the jury that the sentencing is way too high. As with the Martin Grossman case of a few months ago, Chabad has been pumping millions of dollars into the PR campaign to spread the word about Rubashkin — they even got a bunch of former US Attorney Generals to send letters that say the sentencing was wrong and so on.

On the frum news blogs like Vos Iz Neias, Yeshiva World News and Matzav, the commenters and articles seem to be claiming the courts are anti-Semitic and if Rubashkin weren’t Jewish he wouldn’t be treated so harshly. I tried to get my lawyer friend who wrote the article on Martin Grossman to write one on the legal issues and what he thought of the Rubashkin case, but he never got back to me.

I decided that I wanted to know what you folks thought of the Rubashkin case and PR campaigns supporting him. Most folks automatically jump to the defense of a fellow Jew, but that’s not how I roll. If I am to support a cause, I want to be sure I am not just jumping on the bandwagon. I also trust that due to the diversity of the folks who read this blog, the comments and speculation should be more interesting than that of the one sided websites that either support or hate Rubashkin – for example Failed Messiah vs. Crown Heights Info.  I hope that some sort of conclusion or clarity can be reached based on the discussion this post receives.

The video put out by Chabad is quite good and convincing, and I like the actor they hired to do it.

229 comments for “What do you think of the Rubashkin case?”