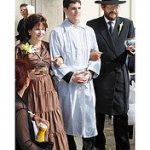 For some reason I won’t allow myself to merely write little tidbits that have entered my mind at one time or another, because I usually find them too short to write as a full post.  Recently I looked at my very long “stuff to write about” list and noticed several recurring sexual topics that I thought I would share with you – at one point many of these were going to be posts, but they were too short to make the cut. I think I may try (combining random ideas) more often.

Chupah Boners:
I used to think a lot about public boners. It’s not like I was having them or watching others have them but at weddings I used to wonder how the chosson could keep it down when he knew that after 3 dances, eating some soggy salad, dry salmon and picking at the desert table he would be getting down and dirty for the first time. With that knowledge in mind, how could he keep it from rising up at the chupah, for instance. I then thought about the genius of the Rabbis who mandated that the chosson wear a kittel and I realized that the kittel hides the impending chupah boner very well.

Shtetl Sex:
How did they have sex in the shtetl if everyone lived in one room? Wasn’t everyone really pious and tznius back then? If they were, that would mean they never could have sex, unless they did while the kids were at cheder – but only rich people could afford to send their kids to school and rich people probably had private rooms for the parents. If sex wasn’t too frequent why did they have so many kids? This could also be applied to present day families that have a lot of kids and no privacy.

Ok that’s it for my immature mini-sexual posts. Hope you enjoyed.

← What do you think of the Rubashkin case?
What I do on my off days →