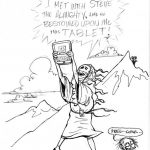 Sofrim in Monsey are scrambling for new clients quickly before the new iPad Torah becomes too popular. The iPad Torah app is predicted to reduce the need for new sifrei torah. We have just learned that Rustybrick, a tech company from the Monsey area have invented the iPad Torah app as a cost cutting measure for the local community. Several inside sources have told FS-News that the Monsey area has been hard hit by rising fuel cost and high tuition costs and that many shuls could no longer afford the upkeep of their sifrei torah.

We spoke to one local resident who insisted repeatedly that he had lived in Monsey for many years before everyone moved in. Why he kept stating this, we don’t exactly know — but he added that when Boro Park decided to try a satellite location in the area, property prices went up and the tax base went down due to basement shuls, white flight and an increasingly poor population that overwhelmed the public schools. Unlike other areas in which Jews could threaten to send their kids to public school if federal aid was not received – Monsey politicians could call the bluff and therefore many residents had to make due on minimal wages and high prices to get into the city to work every day.

These factors, along with a tremendously high birthrate have caused high prices for torah scroll writing and many shuls have simply had to forgo purchasing new torahs because they simply couldn’t absorb the costs. Monsey also has the distinct honor of being home to the largest number of basement shuls, due mostly to the fact that houses of worship do not pay property taxes – even though some of these “houses” of worship are makeshift playrooms that transform for one minyan per week.

Regardless of whether the Rabbis decide that laining from the iPad Torah is muttar or not, we will be watching this story closely.