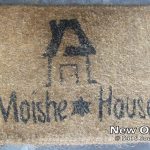 Feedback on this article is very important – any comments, pro or against my arguments would be much appreciated.

I have just been asked to join a friend in applying for a new Moishe House and he doesn’t keep kosher or want the house to be kosher. We are having this raging debate about whether or not the Moishe House should be kosher. For those who don’t know what a Moishe House is. I have traditionally explained them to be like a non-denominational Chabad house, but the NY Times just wrote a good article about them.

I understand that my friend doesn’t keep kosher. As a public Jewish establishment I am dead against having a non-kosher kitchen due to inclusiveness purposes and the fact that the Moishe House to which we are applying will undoubtedly have affiliated and kosher keeping Jews who want to be a part of it. Food is one of those things that binds people together, especially Jews – and although I feel that keeping kosher is a personal choice and everyone is entitled to their choices, a public space dedicated to getting young Jews together should be kosher. He feels that the prohibitive costs to hosting meals and the fact that snacks and other packaged foods can be used for events negate the kosher aspect.

I myself have mixed feelings about living in a non-kosher home, but putting my name on an application for a public Jewish space that isn’t welcoming to all Jews goes against some of my fundamental beliefs as a Jew and social liberal. I am not advocating for all Moishe Houses to have kosher kitchens, although it would be nice. I am just saying that if you’re going to make a public Jewish space in a place that has affiliated Jews (so to a Moishe House in the middle of nowhere far away from affiliated Jews may have no reason to be kosher) – shouldn’t it be kosher?

The other question is – is it kosher for an orthodox Jew to live in a non-kosher house?

59 comments for “Should Moishe Houses have kosher kitchens?”