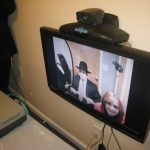 We talked on the phone and chat for several months before she decided to fly in to meet me. I had seen her picture and didn’t really like what I saw, but she was so cool that it didn’t really matter to me. That’s one of my problems. I tend to ignore my lack of attraction to someone if they are my type because it’s so hard to find my type. We continued to talk on the phone and I continued to convince myself that at the right angle she didn’t look half bad. I would look at her Facebook pictures and try to find ones that made her look decent. None of them really did but like an idiot I ignored my mind and continued to chat with her over the phone.

Instead of being a man and telling her that I would love to meet her if she were in my neck of the woods sometime. I let her book a flight to come in for a visit. I have never flown anywhere for a date and I felt kind of weird letting this girl I wasn’t really attracted to come half way across the country for a date – but, out of towners do desperate things. This was going to be a shidduch weekend, and shidduch weekends are disasters waiting to happen.

Shidduch weekends usually require that you go out with the girl multiple times. This sometimes works because you may really like the girl. Unfortunately, I really did like this girl, but ignoring my lack of attraction and feeling like I could force myself to become attracted I made the same mistake that people on the other end of my stick do. On the other hand, I could have immediately rejected her based on the picture. This is what many people do and I am firmly against this – I don’t think pictures ever really show you how a woman really looks, mostly due to the expertise that girls have in hiding their true looks unless you can find their secret stash of real pictures that are tagged on facebook.

The problem with shidduch weekends are that if you take the girl out once and don’t like her, you are really supposed to take her out any chance you get on the weekend. So I took her out three times — Friday, Saturday and Sunday. It made for the most awkward shidduch situation in which I have ever put myself.

It was a good thing that she was a lot of fun. If she weren’t, it would have been worse. Since then I have made some rules up in my head. One of them is that talking on the phone, email or chat should be limited until you meet. I know that many out of towners tend to ignore these rules because we can’t just hop on transcontinental flights for a couple of dates. I find that when you talk on the phone, all of these unreal expectations get thrown into the mix and this is really unhealthy.

Skype could have changed this whole situation. I think Skype is great and don’t understand why anyone wouldn’t want to use it for shidduch purposes. Unfortunately, many people don’t feel the same way. I convinced my friend who lives out of town to start Skype dating instead of talking on the phone constantly. I find that phone and email conversations tend to create all of these expectations that screw you over once you meet the girl and she isn’t like the one of your dreams.

My out of town friend tends to travel to New York every few months for a shidduch pilgrimage in which he arranges a bunch of dates with different girls with whom he has been in touch over frumster, saw you at Sinai and Jdate. These dates usually end in catastrophe and rarely do they go out again. I have my own theories on long distance shidduch dating and dating more than one girl at once, but when you live thousands of miles away from New York it’s tough not to do so. He got a webcam and started to request that they have a Skype conversation. To my surprise many girls refused to Skype – claiming that it was shallow. We discovered that it was usually the girls that didn’t think too highly of themselves who didn’t want to Skype.

I don’t think these girls understand how hard it is for someone to just pick up and fly 2000 miles for a date with someone they have never met. It’s not the easiest thing and Skype can make it easier for both parties to see each other face to face. It’s not perfect but it’s more personal than a phone conversation. You can also tell the person to stand up, do a little walk, bend over and other maneuvers so that you can see beyond their perfectly posed frumster pictures which show them next to pillars that hide half of their bodies in shadows.

I wonder if anyone has tefillin skype dates?