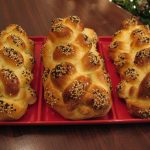 I grew up with the full slice. My father never even thought about size or order when he cut and distributed challah in our home. He used to cut these huge bricks off of a yellow Zomicks challah. Others may debate that the challah was in fact cake and they may be right but we were satisfied with our huge pieces of challah cake. This was well before the country went into an anti-carbohydrates fad, spurred by the Atkins diet, and decided that challah slices should be minuscule.

Small pieces of challah trouble me for many reasons. Chief amongst these reasons is that it requires that one ask for the challah tray multiple times. This makes me look like a challah hog. They rarely provide enough bread to make a suitable knife for the fish course and small pieces don’t dip into soup well at non-gebrokts families of course.

However, it’s not only small pieces that bother me when it comes to challah cutting tradition. It’s the entire process, from washing to eating tiny pieces of challah. The challah cutting process is riddled with so many hectic moments that I feel I need to discuss it with you here, so we might be able to bring some change to some of the troubling practices within the frum community.

Pre-Washing: Why do so many people feel the need to have a long winded conversation right before they are about to wash? This usually happens after everyone has received their little wine cup and are wondering if they should get up and wash. I have been at many a family that had decided a 15 minute conversation about wine fountains was due. Once in while, deep into the already overextended conversation, a courteous host will say – why don’t we continue this after we wash? It is merely not often enough that someone gets the hint.

Washing: I used to be the first one to wash. I figured that if there were one or two people sitting quietly at the table, the others would realize this and come to the rescue by washing their hands for hamotzi in a speedy fashion but I was wrong. Large meals at wealthier people’s homes tend to set up the washing situation so that the hostess spends time showing her friends the beautiful salad that she had made and on which illegal immigrant maid was putting the finishing touches. The men start talking about Scotch or sports and suddenly washing has been abandoned for a kitchen conversation. Meanwhile, several pissed off guests are sitting in the dining room.

Knowing that this is likely in certain people’s homes, I have come to hang out in the kitchen and hint that we could wash and talk about salads and sports later. Once in a while, more familiar guests will yell an unnerved NUuuuu from the dining room, and the hostess will say that we should wash.

After Washing Before Hamotzi: Everyone is a sitting at the table. The bread is steaming, the challah board is flipped upside down, the knife is ready to make the kill and suddenly the knife is down and the host is playing a charades game with his wife who cannot figure out for the life of her that he needs the salt. This is as if charades at the moment of the challah kill is common for some other extreme need. At this point the wife gets up and the kids start screaming in davenese at each other. They pull each others hair and kick one another under the table. If the salt arrives quickly, the noise dies down and the challah is cut. If the salt takes longer everyone just sits impatiently while they promise themselves that their kids will be on higher doses of Ritalin.

The Cut: If you have ever wondered why so many more people aren’t mohels, just visit any home and watch the man or woman of the house cut the challah. Challah cutting is a skill that most people don’t have. They can have the best challah boards (in my opinion these are the one’s with slats that catch all of the crumbs in a little compartment) the coolest challah covers from Tzfat and the best knives and still have no idea how to cut challah.

Without even getting into the small sizes of today’s challah cuts, the act of making the cut poses problems for many people. Flaky and really soft challah tends to pose the most problems, and many people try and use dull and hardly serrated knives. Challah knives should be deeply serrated with an angled handle like any kitchen serrated knife, but most of them aren’t. Still, challah cutting isn’t all about the knife. It’s also about speed and precision.

The biggest point of contention I have with most challah cutting is that when it seems impossible to cut the challah, the host will insist on cutting it and not breaking it. In fact, many people insist on cutting break-away challah’s, even though they were designed specifically to break away. Why can’t people just make their pre-cut symbolism/ churban cut or whatever it’s for and then break apart the challah that couldn’t be cut?

Expectations: I don’t expect families of 8 to give me the full slice, but I do expect families of 4 to do it. I also expect conversation to take place after we hungry folks are done with the whole process. Anyone who washes before Kiddush is my hero. It just makes things go by so much smoothly. If we can optimize the challah cutting process, we may help bring the geulah faster.