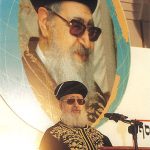 I know nothing about Sephardic Israelis. Luckily, someone sent this post to me via email. She wished to remain anonymous and since I really don’t know if it’s accurate I will let you folks decide. This is coming from a woman who lives in Israel and is married to a hardcore Sephardic Israeli dude.

Kitniyot all year round

Halvah or poppy seed filling in every conceivable desert

Netz- I still haven’t figured out why praying before the crack of dawn every day actually attracts people.

Davening at the crack of dawn even on Shabbos- It gives more time to get home and eat 2nd meal by 9:00am, leaving plenty of time for a nap and at least 3 more meals

Meat at every meal

Glass dishes- so convenient for everything

Sandals- year round wear for men and women

Dozens of pictures of various kabbalistic Ravs hanging all over the walls of their houses and businesses. Probably half of the people who own these pictures don’t even know anything about the Ravs in question, but it’s good mazal

Yelling at each other at the top of their lungs that makes every passer-by think there is about to be a murder and then sitting down to drink coffee together 5 minutes later as if nothing had happened.

Putting whole eggs in their cholent

Yelling Moroccan trills at weddings at the top of their lungs

Singing Yigdal at every service

Attaching a “donated by” card to every item in the shul, including every light fixture, seat, sefer, and carpet

Rav Kaduri, the Baba Sali, and the Ari z”l and talking about how much holier and more powerful these guys were than that crazy “Rebbe m’Lubavitch” ever was

Obsessive Pesach cleaning- “It makes me feel like a natural WOMAN…”

Leaving out half the prayers of Kabbalat Shabbat every week

Weaning their children on cucumbers and Bamba

Hummus and some kind of eggplant concoction at every meal

Shir haShirim- I think most Sephardim know it by heart after reciting it every Shabbat and at every other opportunity one might (or might not) think of.

Pretending they have no idea what you’re talking about when Americans say something about “bagels,” “cream cheese,” “lox,” “sour cream,” “latkes,” “dreidles,” “benchers,” “shtenders,” “hamentaschen,” and a multitude of other words that characterize American Jewry.  Believe me, they know what you’re talking about; they just like seeing you stammer and feel “not really Israeli” because you don’t know that “real Israelis” have their own actual Hebrew words for all that stuff.

Pretending they don’t speak or understand a word of English.

Lighting tons of candles for Shabbos, 2 for Shamor v’Zachor, plus 1 for each kid, and goodness knows what else.

Singing zemiros and prayers from the Siddur in strange whining call and response method with a tune that really sounds like it should be coming from a loudspeaker on top of a mosque.

Bragging about the elite army units their sons are in- I’m starting to wonder if there are any non-elite units in the IDF the way you hear these people talk.

“Rescuing” poor miserable Ashkenazi women by marrying them so they can switch over to the higher, more enlightened Sephardi minhagim.

Frummer than thou Ashkenazim

Draft-dodgers- “If you’re really that overly religious do sherut leumi or join one of the Haredi units; otherwise get your tachat out of my country!”

People who don’t vote Shas- A couple of elections ago, Shas ran an ad in the paper in which Ovadya Yosef promised Gehinom for anyone who voted Kadima and an instant ticket to Gan Eden to anyone who voted Shas. (And no, I am not kidding or exaggerating).

Anti-Zionists- Non-Zionists are tolerated, but if Israel had the death penalty the first candidates Sephardim would suggest for it would be those #@*&! from Neturei Karta.

People who are very concerned about keeping Shmitta.  As long as at least one rabbi somewhere says it’s ok to eat such-and-such than it must be ok.  Being machmir is so overrated.

Selichot: 40 days of getting up at 3am, need I say more?  Isn’t Netz early enough/

Gefilte fish- you call that food?

Fish and dairy together

Lines- If there is a line, you can bet all the people standing in it are foreigners or Ashkenazim.  The Sephardim already cut to the front of the line 15 minutes ago.

Wigs- oh so not tzinius!  Better to wear a hat or a scarf with half your real hair sticking out of it than a sheitle.

People who get smudges on their stairs, which must be cleaned at least once a day

Pets- but especially not dogs.  I think this comes from the fact that Arabs are scared to death of dogs and think they’re totally unclean, which stuck with their Jewish neighbors too.

Neighbors who yell “Shabbos” at the Sephardi’s off the derek kids, wives, etc who go outside and start the car or walk around outside smoking or talking on their cellphones on Shabbat.

Haredim who riot over parking lots, autopsies, theaters, swimming pools, graveyards, or any of those type of issues that Sephardim would rather go with a “live and let live” approach to.

Women in shul- on the rare occasion there is a women’s section, you can bet it will be almost empty.

Every kind of kugel except “Yerushalmi kugel”

Letting their babies go outside even in the summer without the protective covering of multiple blankets and a snowsuit.  And yes, I actually have seen women carrying around babies dressed in snowsuits on hot spring days.

Buying any baby furniture, clothes, or supplies until the day before the baby is ready to come home from the hospital, you know, just in case something goes wrong, chas v’chalilah.

Humanities degrees- “If you have to shame us by going to the university, at least get a degree in something that’s going to make you some money!”

← If the girl’s ugly, just pretend you’re the deliveryman
Petition asks RCA to allow women to leave the kitchen →