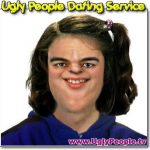 My buddy has a problem — he tends to get set up with ugly girls. This problem is multiplied by the fact that he lives in the middle of nowhere and has to fly 4 hours into New York City for what he calls Shidduch Marathons. During these marathons, he frequently goes to girls houses to pick them up.

The door opens and the girl says his name and most of the time he wants to say, “No, I think I have the wrong apartment.” Unfortunately for him, he’s way too cordial to ever say what he is actually thinking. I think life what suck if we could just say the things we were thinking. Everyone would be killing each other. Can you imagine what people would say to each other on Shidduch dates or at the Shabbos table if it were totally cool to speak our minds? I used to speak my mind much more – but as an adult I’ve learned that most people can’t handle the truth and so I just write it instead.

We were talking the other day and I told him he should just bring an empty pizza box whenever he goes to pick up the girl. He can get one of those small boxes and pretend he’s the deliveryman when she opens the door and looks nothing like her Frumster or Saw You at Sinai pictures — and we all know they never do.

43 comments for “If the girl’s ugly, just pretend you’re the deliveryman”