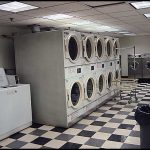 A fan sent to this to me via Facebook

The following is being reported exclusively by the Torah True Times.

The Vaad Ha Tznius has just issued the following guidelines regarding laundry.

It has come to our attention that many families, including those who pride themselves on following all aspects of halacha, are regularly not conforming to proper Tznius guidelines. Unbelievably, many, many families are washing men’s and women’s clothing together at the same time in the same washing machine. This is an unprecedented breach of Znus How could anyone think that one is allowed to wash men’s and women’s undergarments at the same time in the same washing load? What has our nation come to when people have fallen to such a low level? For shame!!! This practice must stop!!!!

Given this we are issuing the following guidelines regarding the doing of laundry.

2. In the event that a family cannot afford to have two washing machines and two dryers, the following rules should be adhered:

a. Under no circumstances should men’s clothes in the same machine as women’s clothing. They should, of course, also be dried separately.

Our forefathers lived in a land that was between two rivers – the Tigris and the Euphrates. The reason is obvious to anyone who thinks into it a bit. One river was used to wash women’s clothing and the other to wash men’s clothing. Surely we can continue this tradition by observing the rules stated above.

We are confident that everyone who takes Yahadus seriously will abide by the guidelines stated above.